The armbar, also called cross armlock (judo), chave de braço in Portuguese, or ude hishigi juji gatame in Japanese; is a common grappling submission hold used to force the opponent to quit (tapout) thus ending a match in either jiu jitsu, judo or mixed martial arts (MMA). The armbar is one of the most traditional types of locks utilized in grappling, a lock that works by hyperextending the elbow joint. In the English speaking world, the armbar relates to a specific straight armlock performed with the arm of the opponent in between the attacker’s legs, while an armlock is a term that can be used to describe a number of submission attacks to the arm, including the kimura and americana locks.

The History of the Armbar 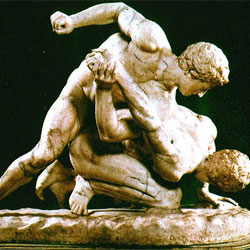 Although wrestling has been around for 1000’s of years, with grappling paintings dating as far back as the Upper Paleolithic era (15000 BC), not much seems to be reported in any of the hundreds of artwork throughout the millennia, regarding submissions. That is, until the ancient Greece era.

The Greeks, who adopted many of Egypt’s customs, dedicated more thought to the submission aspect of grappling than previous cultures through their wrestling and pankration, adding numerous submissions such as chokes and armlocks as the ones depicted in picture 1 and picture 2, where the wrestlers are clearly showing an intent to bring the opponent to a surrender by controlling the arms with police style grips. 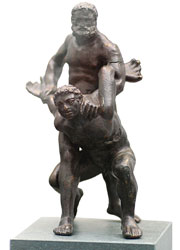 The ancient Greek wrestlers had also accommodated submission holds in their rule book, this has been revealed in investigative work of historians such as Christopher Miller in his essay “Submission Fighting and the Rules of Ancient Greek Wrestling“. Though we know that joint locks and chokes were being used in Ancient Greece, not too much imagery has survived that could shed light on the technicality of these movements.

In Cambodia we can see some advancements in carvings such as the one depicted in picture 3 (Ankor, date uncertain), where a straight armlock is taking place – a move towards the modern day armbar, although still a few steps behind the complexity of the cross armlock. The appearance of the armbar as we know it may have taken place in Japan during the ju-jutsu days, later being also adapted to the guard by the early judo men who brought their information to Brazil. 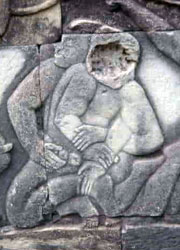 In Brazilian jiu jitsu the armbar has been the sport’s bread and butter from the very get go, having in Carlos Gracie (sr) a big fan of the submission. This much is mentioned in Reyla Gracie’s biographic book “Carlos Gracie: Criador de uma dinastia“, where Carlos is mentioned winning a few of his matches via “chave de braço“.

The ever so popular armbar was also the main ally of the closed guard when Sergio Penha, Pascoal Duarte and Otavio Peixotinho started their development of this famed position in the early 1980’s. After Penha’s eye opening performances, the closed guard > armbar set up became one of the most utilized moves in jiu jitsu.

The success of the armbar carried over to mixed martial arts (MMA), becoming somewhat of a symbol for Gracie jiu jitsu’s effectiveness, particularly after Royce Gracie‘s finishes over Jason DeLucia and Kimo Leopoldo at UFC  2 and 3 (1994).

The victory over Jason DeLucia marked the first time an armbar was performed inside the octagon, with the picture of the submission travelling around the globe in VHS tapes, magazines and books. The armbar was the king of the submission game in MMA, especially at the peak of Rodrigo “Minotauro” fame in the Price FC organization, with his famous armbar wins over Mark Coleman, Bob Sapp and Mirko “Crocop” during the early and mid 2000’s. The straight armlock submission stayed somewhat dormant during the second half of the decade, but came back to the spotlight through Ronda Rousy with her notorious armbar 1st round win streak in the UFC.

In the sport of jiu jitsu the armbar never lost popularity, maintaining its importance throughout all generations, being one of the most utilized submissions ever in tournaments such as the ADCC and IBJJF World Championships.