The heel hook is a grappling submission hold commonly utilized in a sporting environment to force an opponent to quit (tap-out), thus ending a match in either jiu jitsu, combat sambo, catch-wrestling or mixed martial arts (MMA). The heel hook is applied by controlling the knee/hip joint(s) as well as the heel bone, after which force is applied transversely, twisting the heel either medially or laterally. This motion will force a torque on the ankle, which in turn transfers the torque to the knee, causing possible injury to multiple joints and ligaments.

The History of the Heel Hook

As mentioned throughout our “history of techniques” section, grappling is one of the oldest activities known to men. As such, most of our sport’s modern day positions had their starting point 1000’s of years ago in one form or another. The heel hook is no different. One of the earliest forms of grappling where the heel hook can be observed through the culture’s artwork is in Ancient Greece. The popular Pankration and it’s technical advances were transposed to Roman culture, which absorbed a wide range of aspects from Ancient Greek social life.

When going through Nektarios Lykiardopoulos’s book “The Martial Arts of Ancient Greece: Modern Fighting Techniques from the Age of Alexander” we can identify a very clear heel hook being depicted on a Roman stone carving, which can be found in a Vatican Museum (age uncertain), applied by a centaur (see image).

Digging deeper on this subject, there are many Ancient Egypt wrestling drawings that show a variety of leg attacks, including knee-bars, prior to Ancient Greece. Though with our limited resources, we couldn’t find any that showed clear heel hooks.

THE HISTORY OF THE HEEL HOOK IN BRAZILIAN JIU JITSU

There are a few myths surrounding the heel hook technique in jiu jitsu. One of which is that the famous 1960s grappler Ivan Gomes would have been the creator of the submission. This claim was only strengthened by one of Master Carlson Gracie‘s interviews to Marcelo Alonso of PVT, many years ago in which Carlson mentions:

He [Ivan] arrived in Rio for a fight and asked to stay and train with me. Later he travelled the world, and was the first Brazilian fighter to become a big star in Japan. The heel hook that we use today was created by him. – Carlson Gracie 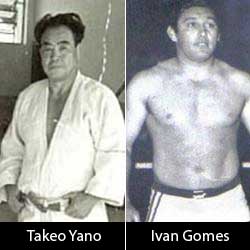 We followed Carlson Gracie’s lead. As Ivan passed away in 1990, we met with coral belt José Gomes, Ivan Gomes’ younger brother – who trained with him all his life. José said:

“The Heel Hook existed before us. Itcame through the Japanese that landed here in Northeast of Brazil. Our coach Zé Maria [José Maria Freire] taught us these positions. He learned them from Takeo Yano and Builson Osmar [Yano’s student] (…) Yano came from a different lineage, not really from the Kodokan. He had been with the Japanese Imperial Navy and his school was called Butokukai. He was a great fighter, Helio [Gracie] drew with him. Yano and George [Gracie] were training partners for a long time too here in the Northeast.”

Though Ivan was certainly the first grappler in Brazil to bring attention to the heel hook submission, Takeo Yano was indeed one of the great disseminators of jiu-jitsu in the northeastern region of Brazil in the first half of the 20th century. There he taught and competed for many years, leaving very solid students who went on to lead successful schools, one of which is still running strong today, the SAS of Master Francisco Sá (RIP), now under the management of his son “Sazinho”.

Jiu-jitsu started taking shape as a sport in the early 1970s. With the first federation (inaugurated in 1969), several of the top instructors in the Rio de Janeiro area gathered to outline the rules for jiu jitsu’s sporting environment. This was when the first point system was set, and also when the restriction book was more clearly outlined. Positions such as the heel hook, the kneebar, and spinal locks were banned. According to coral belt Pascoal Duarte:

As soon as jiu jitsu became a sport these positions were ruled out. Even in training they weren’t allowed, and if you tried to do them you would be regarded as rude or lacking in technique – Pascoal Duarte

What Master Duarte meant with the “lacking in technique” comment was that this rule imposed a stigma on the heel hook, one in which you would only go for “footlocks” if you weren’t technical enough to pass a guard properly. Positional dominance being the key factor in accordance with the old BJJ dogma “position before submission”.

During the late 1990s, once jiu-jitsu opened its doors to foreign competitors, mainly from the USA, heel hooks slowly made their way back into the sport, particularly in its no-gi format through promotions such as the ADCC, NAGA, Grapplers Quest and numerous other international tournaments.

The resurgence of the “submission only” platform in 2012, has helped push the heel hook envelope even further. Promotions such as Polaris Pro Invitational, EBI and Metamoris have been highly successful at raising awareness to the importance of this submission in the grappling martial arts concept.

Rousimar Palhares vs David Avellan – Heel Hook in the ADCC