John Danaher is a Brazilian Jiu-Jitsu (BJJ) black belt under Renzo Gracie and an instructor at Renzo’s academy in New York City, being widely regarded by within the grappling community as one of the best coaches of his generation. Praised by some of the prime figures in combat sports such as mixed martial arts (MMA) guru Greg Jackson and jiu-jitsu legend Vinícius Draculino for his knowledge and teaching capabilities, Danaher is best known for his work with athletes such as George Saint Pierre, Garry Tonon, Gordon Ryan and Eddie Cummings known among BJJ fans as the Danaher Death Squad (DDS).

Born in New Zealand John Danaher started grappling late in life (28) in New York City. He was working his way through grad school (later finishing a Masters Degree in Philosophy at Columbia University) working part-time as a club bouncer, while lifting weights to stay fit while weighing around 250lbs (113kg) at the time of his first jiu-jitsu experience. 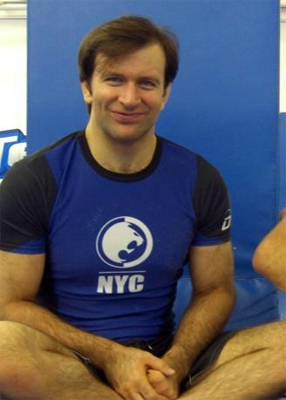 Acknowledging jiu-jitsu’s value helped John push through his training sessions, never truly enjoying it. It wasn’t until RGA was depleted from two of it’s most prominent instructors, Matt Serra and Ricardo Almeida that Danaher truly embraced the sport. Danaher was invited to coach and help replace the two aforementioned standouts, he was a purple belt at the time and took it upon himself to be the best instructor he could possibly be. Although he had no competitive experience, his highly inquisitive mind did not rest until he mastered the coaching aspect of BJJ.

In working at the Renzo Gracie Academy in New York, Danaher also helped the development of MMA fighters such as George St. Pierre, which shed some light into his persona to the broader spectrum of fans involved in cage combat, however, it would be his creative approach to the leg-locking game that gained him the recognition of the grappling community. His innovative system helped Danaher generate a group of outstanding athletes such as Eddie Cummings, Gordon Ryan, Garry Tonon and, to an extent, Craig Jones, all competitors who had fantastic global success in jiu-jitsu. This workgroup of outstanding grapplers would be labeled by jiu-jitsu fans as the “Danaher Death Squad”.