Matt Thornton is the founder of the Straight Blast Gym (SBG), one of the most respected martial arts academies in the world with affiliations spreading across 5 continents. Thornton is also Chris Haueter‘s first jiu-jitsu black belt, a martial art that Matt trained extensively with Hauater and Rickson Gracie, two men whose teachings helped Thornton become a well respected grappling instructor himself. As a coach, Thornton is known for his work, developing the games of numerous top-tier athletes in the combat sports world, a list of students that includes former UFC champions Randy Couture and Forrest Griffin, as well as MMA coach John Kavanagh. 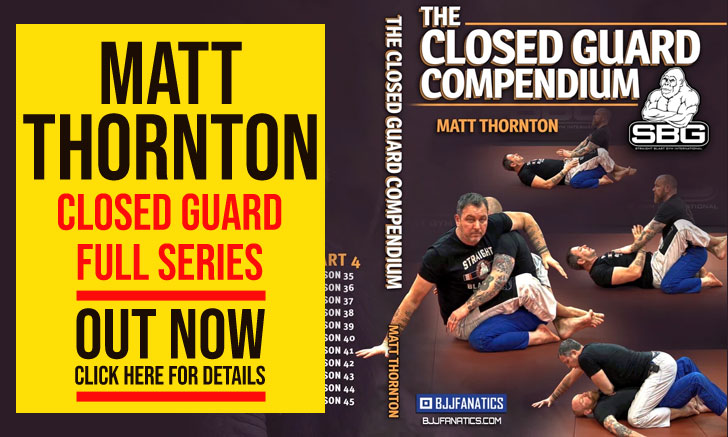 Matt Thornton was born on March 25, 1969, in California, United States of America, growing up in the Bay Area.

Drawn to martial arts from an early age, Thornton started training traditional karate as a child, however, this ended up being a short-lived experience.

After high school, in the late 1980s, Matt joined the military and it was during this period that he started thinking again about the different combat systems available, gaining a particular interest in the functionality of martial arts. Studying his surroundings, Thornton firmly believed boxing was the superior art form, yet, he saw the sweet science’s lack of ground-work as a big missing piece in the fighting puzzle. As such he decided to join a Jeet Kune Do (JKD) class led by a student of Bruce Lee’s disciple – Dan Inosanto – in Portland, Oregon, where Matt had settled at the time.

Originally JKD’s philosophy was grounded on using a combination of martial arts, from grappling to striking in an attempt to achieve the most complete combat system possible. Although everything Matt had hoped for in theory, after training for a while, Jeet Kune Do’s teaching methodology did not feel applicable to the real world in Thornton’s eyes. As such, the young aspiring martial artist decided to add boxing to his training routine while keeping with JKD at the Portland Martial Arts Academy.

According to an interview by the Martial Arts Journey YouTube channel to Thornton back in July 2018, Fábio Santos came to Portland to work as a surfboard maker in 1992. Santos was a Rickson Gracie black belt and wanted to stay active with his training, but, as there were no jiu-jitsu gyms in the area at the time, Fábio decided to post an advert on the local newspaper, challenging people to fight him in exchange for monetary compensation. Thornton was curious and excited to test the skills he had learned over the years and accepted Santos’ challenge.

Although larger than Fábio Santos, Thornton (6’7 – 2 meters tall) was easily beaten by the Brazilian black belt. His technique on the ground fascinated Matt, who took time to learn a few tricks from Fábio during his stay.

Excited about his findings with Fábio, Thornton returned to his JKD club eager to tell the crew what he had learned but discovered the gym members and leadership were not interested. At this point, Matt had been a regular instructor at this martial arts facility and had a good knowledge of the curriculum structure. With that in mind, he decided to open his own academy, in Keizer – Salem, where he could explore combat with an open mind, the way he intended it from the very beginning, giving way to the first Straight Blast Gym (SBG) somewhere between 1992 and 1993.

Through his friendship with Fábio Santos, Thornton met Rickson Gracie. The no-holds-barred legend became an inspiration for Matt early on, and it was he who promoted the young American to blue belt in 1993.

It was also during 1993 that Matt Thornton met Chris Haueter, one of America’s jiu-jitsu pioneers. Haueter became a regular guest of Thornton’s in Oregon for seminars and training and it was he who promoted Matt with his purple, brown and black belts – the latter awarded in a 2002 ceremony.

Matt’s school, SBG, became Oregon’s first MMA style gym, an idea that spread like wildfire through the United States and to the rest of the world, becoming one of the most successful franchises in martial arts with many important athletes spawning from Thornton’s affiliates on to the mats and cages of professional fighting.

A man of many talents, Thornton worked on a variety of projects through the years, from being an instructor at SBG, to leading his organization with over 50 affiliate academies, while becoming a published martial arts writer on multiple platforms. These include Black Belt magazine, Inside Kung Fu, Martial Arts Legends, Fighters, Martial Arts Illustrated, and many more.

Arguably, Matt’s most well-known training concept is that of his “Aliveness” methodology, a subject on which he has given numerous workshops. This is described in Wikipedia (check here) as a “training method that is spontaneous, non-scripted, and dynamic. Alive training is performed with the intent to win, rather than for mastery or demonstration purposes as in regular sparring, where victory is not an option.”

In the now extinct SBG website, the Aliveness training method was said to be applicable to a number of combat activities and is applicable via “spontaneous footwork, the active resistance and intent of all parties during drills or sparring; Timing, in which there is no ‘predictable rhythm… pattern, [or] repeatable series of sets’ which would lead students away from acquiring applicable skill; and Energy, the practice of committing, with intent and realism, a given technique during sparring, ‘bag work’ or drills.” Matt’s website went on to explain that “(…)there are many things we may do that improve [our] bodies that are not ‘Alive’. It’s just that all of those things fall under the category of conditioning/exercise… Aliveness comes in when you include a partner.“