FEBRUARY 12, 2022. SÃO PAULO, BRAZIL, is widely regarded as the Mecca of jiu-jitsu in the South American country, this weekend, however, it was promoted to World capital of submission-grappling altogether. The home for the most talked-about tournament of the year, thus far, which was the second and final edition of the ADCC Brazil Trials, a tournament designed to bring out the best South American challenger to the promotion’s world title in September.

The ADCC World Championships is seen by many of our sport’s top thinkers as the Olympics of no-gi jiu-jitsu, as such, it was only natural to foresee some of the finest talents South America has to offer on the mats this weekend. This turned out to be an understatement. Near 300 matches were observed by BJJ Heroes, almost double the numbers of the past South American Trials (earlier this month), whose results you can check by clicking here. To read our full report on the São Paulo ADCC Trials, keep scrolling down.

As mentioned above, we recorded nearly 300 matches at the São Paulo, South American ADCC Trials, which was an increase of 113 matches over those recorded at the Balneário Camboriú last weekend and 38 more than the USA’s East Coast Trials in Atlantic City last year.

The São Paulo event had a very respectable 49% submission rate, just under the numbers of the Balneário Trials and over the Atlantic City showdown, which was also at an impressive 44%. These are very exciting numbers when considering that the average high-level tournament seldomly exceeds the 40% ratio barrier.

Another interesting piece of information was the sheer numbers of heel hooks, which surpassed those seen in the US, a trend we had observed also during the Camboriú Trials. The heel-hook frenzy is alive and kicking in Brazil. 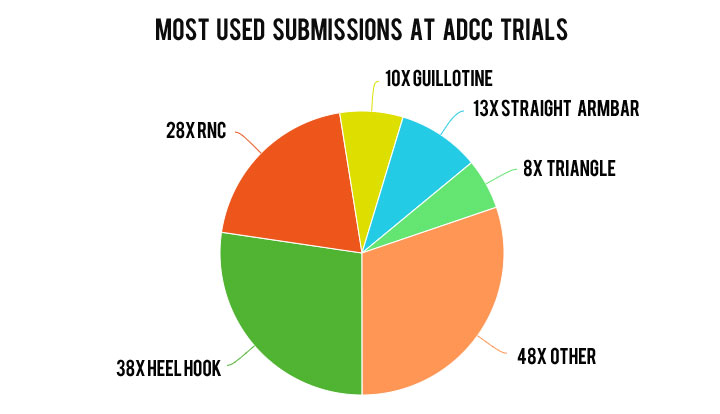 The dynamics of these lower-limb submissions and how they took place are food for thought for a different, deeper dive into these types of finishes and their dynamics. Particularly how so many of them appeared to occur from a  “penalty shoot-out2 type scenario. Stay tuned for that.

If the tournament results are what you seek, feel free to click on the links of the individual athletes here displayed to check their individual tournament runs. The results from the quarter-finals onwards are also shown below.

Without a doubt, Fabricio Andrey blew everyone out of the water this weekend with a performance reminiscent of his teammate Mica Galvão, during the first Brazil ADCC Trials earlier this month. Swimming against the current, Andrey won without a leg-lock-centric game. Instead, solid basics, great takedowns, and a lightning-quick pace did the trick for the young Manauara.

The surprises of the tournament were MMA fighter Rafael Montouro, who conquered a third-place position, and Andrey’s teammate Kaua Gabriel. Kaua is a purple belt under Melqui Galvão who overcame seasoned competitors such as Cleber Sousa and Felipe Nacib.

Mr. Natural himself, Robert Jimenez made the weight-cut worthwhile with an epic performance at the São Paulo ADCC Trials. Jimenez has been a regular appearance in the medium-heavyweight division but showed up ready to challenge for a 77-kilogram spot and did so in style. Back-take after back-take, Jimenez paved his path to a gold medal after 6 tough matches and 4 submissions.

Claudio Calasans’ protege, Alexandre “Robinho” Jesus started dedicating himself to no-gi a few months ago with the intent of making a run for the ADCC World Championships, and that run just materialized into reality this weekend.

6 very hard matches and two submissions led Jesus to the #1 step on the podium. Alexandre played a well-rounded game, with solid takedowns, an aggressive traditional guard, and good top control.

Equally impressive was runner-up Rafael Paganini of Dream Art. The former Alliance São Paulo representative went through an array of tough challengers on his way to the final, which included a submission win over Diego Ramalho and decision victories over Vinicius Reis and Valdir BB Monster.

Earlier this month Henrique Cardoso “hit the post” at the 1st Brazilian ADCC Trials, losing in the final to João Costa, this weekend the Ceconi KMKZ team member took no prisoners or chances. Flawless performance for the young Brazilian with a balanced mix of aggression and tactics.

Brown belt Luccas Lira was equally impressive on his run to the final. Lira showed an excellent understanding of footlocks while also maintaining a clear head towards the end goal, the win.

Not a bad no-gi debut for the GF Team talent, Gutemberg Pereira who took gold with 4 wins and 4 submissions. “Berg” showed up with a well-rounded game, pulling guard and working his way to the top position with his skilled guard, while also attacking submissions from his back.

We alluded to Mayssa Bastos being the best P4P female athlete in the game today, but we also referenced how being the smallest athlete in the division could be a tall order (no pun intended) for the Unity Team representative. We are happy to say Bastos put all our doubts to rest (and then some).

A beautiful performance for Mayssa who submitted 2 athletes in her 4 match run for gold. Great tactically and technically, Bastos used her unpassable guard and her outstanding back-taking game to steal the show.

Not a bad day for a 19-YO purple belt! Giovanna Jara stole the show by being the youngest and lowest belt ranked trials winner of the day.

Jara earned her purple belt in December last year, after her double gold performance at the IBJJF World Championships as a blue belt, and appears to have transitioned flawlessly to the no-gi ruleset of the ADCC submitting 3 out of her 4 matches. Solid top pressure, a relentless back-taking game from that passing stance were the perfect strategy for the Dream Art prospect.