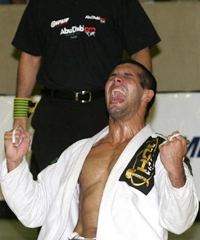 Another fantastic day at the “Clube do Flamengo” in Rio de Janeiro Brazil, as the last Brazilian spots for the Abu Dhabi Pro Cup Trails are handed out. The winners are taking away more than just another gold medal, on this occasion they are taking an “all expenses paid” trip to the UAE capital later this year, to compete in one of the world’s most important Jiu Jitsu competitions, that awards it’s winners a very sizable prize.

Brazil being the strongest Jiu Jitsu nation on the planet, having Rio de Janeiro as the Meca of BJJ, it is easy to understand how important these trials were for the main event, here is a short description of what went on in the Flamengo borough of Rio de Janeiro.

A re-encounter of Mr Pimenta and the BJJ superstar Rafa Mendes, as they met two weeks ago at the South Brazilian Trials. Once again Rafael was the winner with a smashing performance, passing the guard, securing the mount and later taking the back and still having time to seal the deal with a choke from the back. Teodoro was less impressive in his win over Eduardo Ramos, taking the fight with a 3×0 score in advantages.

Another walk in from Rafael as he pulls guard, sweeps, takes the back and chokes Teodoro Canal. Rafael is having an amazing start in 2010 reaching the finals in every single event he was competed in.

Celso took had a hard time disposing of the always “game” fighter Mario Reis, the fight was tied in the semi-finals but Celsinho took the decision from the judges. Gilbert had an easier fight, winning by 8×0 against Rafael Formiga. “Durinho” took “Formiga” down, then took his opponent’s back and sealed the deal with a sweep.

“Celsinho” was the favourite, but things didn’t go according to plan as Durinho passed his guard and mounted the World Champion, Celso hit back with a sweep, but the final score was 7×2 to Gilbert.

Vinicius started strong, imposing his rhythm and taking the fight to David, before da Silva had time to compose himself, the fight was already 7×0 for Vinicius, however, Marinho got sloppy and ended up on the wrong side of da Silva’s strangle hold as he was forced to tap losing his place in the final. Delson “Pé de Chumbo” surpassed Gustavo Campos with advantages (2×1).

Again Pe de Chumbo just squeezing passed with a 2×1 score in the advantages after a 0x0 score board.

Alexandre de Souza was very strong once again in this competition as he reached the final with a 3×1 score in the advantages against a very tough opponent in Augusto. Last year’s trial champion Rodolfo was tied with Antonio Braga Neto but managed to get a strangle on Neto winning the fight and the spot in the final.

2×2 was the final score, but the judges in the end gave the decision to a more active Rodolfo Vieira.

Another judge’s decision on the semi-finals as Ferrari takes the final. The brown Belt “Bochecha made it to the final taking the back against the more experienced Bruno Veloso.

The surprise of the night happened here as the brown belt Marcos “Bochecha” took the fight to Ferrari, scoring the points for back control guaranteeing his place in the final stage in Abu Dhabi.

Ana Maria had an amazing half final in a true battle of wills against Jessica Arlindo, winning the fight close to the final with a triangle. As she came to the final against heavy favourite Luana Alzuguir, she was overwhelmed by the superior pace of Alzuguir losing by a conclusive 20×0, Luana in Abu Dhabi.