Jiu-jitsu black belt Jena Bishop is one of the main figures in the submission-grappling’s international circuit. A former International Brazilian Jiu-Jitsu Federation (IBJJF) World Champion in the Masters and Adult No-Gi divisions, Bishop has more recently conquered the American East Coast Qualifier to the 2019 ADCC Championship, a tournament many label as the ‘Olympics of Submission-Grappling’.

Her status as one of the sport’s prime athletes has placed Bishop in a privileged position to address a few cultural issues that have haunted our sport over the years. One of those is the use of PEDs in jiu-jitsu. In a recent poll set forth by Jena’s husband, Tyler Bishop (also a BJJ black belt), 85% of voters stated their belief that ADCC competitors were anabolic steroid users – a synthetic steroid hormone which resembles testosterone in promoting the growth of muscle, and injury prevention.

Given the severity of these numbers, and considering the only tournament currently testing for such performance enhancers is the IBJJF World Championship, Jena decided to take matters into her own hands, paying for her own anabolic steroid urinalysis. The test was administered by LabCorp in which she came out clean. 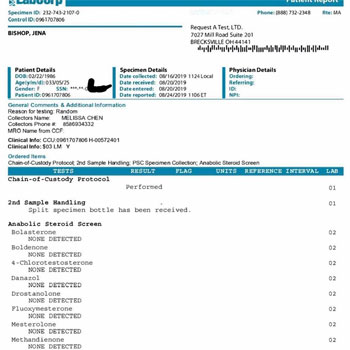 “The test isn’t cheap. It cost $200 USD and I paid for it myself” Jena told BJJ Heroes. She continued: “The whole point of me doing this is to bring light to the fact that not all competitors are using steroids. There is a perception that all of the high-level competitors are using. I would agree that a lot of them are and a lot of them pretend they are not. I figured that I would prove on my own accord by testing myself leading up to the tournament where the abuse of PED’s is well-known. I think that it is important for young athletes and women to understand the repercussions of taking steroids. As a woman, I personally want to be strong and fit, but don’t want to lose my femininity. I really don’t want to have a deeper voice or more defined jawline than my husband. There are so many side effects to taking PEDs that have long term consequences that many athletes may not understand or even know about. Steroid use leads to higher cancer rates, shortened life spans, problems with reproduction… There are just many risks that I’m not willing to take.”

While pondering on the test, Jena had the opportunity to speak with other athletes: “they were very positive about it. I’ve had a few that said they would like to do it too. We talked about how people will just assume you are using because we are strong and athletic, especially for a female and that we get offended by the assumption. We work hard and don’t want people assuming we are having help doing so.” But there is also the other side of the coin, according to Bishop. “I think that there are quite a few women taking PEDs in BJJ and looks can be deceiving in that regard. I see a lot of athletes posting their letter for a passing the drug test for the IBJJF World Championships, but I laugh at that because it’s more of an IQ test than a drug test and not all of the winners are tested.”

When addressing how Jena believes her openness to testing will be received by other ADCC athletes, Bishop does not measure her words: “I’m not sure how other athletes will react to this. I think that there are a few women that are frustrated by the fact that they are clean and having to compete against bigger stronger athletes, but I want them to know they aren’t the only ones. There are probably a few that will dislike the spotlight on something they’d prefer people to ignore.”

In her finishing remarks, Jena Bishop stated: “I don’t think some people understand the point of what I am doing and may take it personally if they use a substance that is banned in sports. My point is not to condemn anyone, but rather be a bright light to those that want to be a champion without supplementing with PEDs.”