MARCH 14, 2022, marked the return of the Submission-Only movement’s OG event. The brand that marked the start of an era, and likely the most influential show ever produced under the SO jiu-jitsu movement/umbrella. It is also the tournament that launched quite a few of the sport’s most celebrated athletes of today, names such as Gordon Ryan, Garry Tonon, Eddie Cummings, to name a few.

Given the many superlatives that can be found to describe the event, there was plenty of anticipation within the grappling community for this weekend’s show, and as expected, EBI did not disappoint. Over the years many EBIs have come and gone, and one thing appears to be consistent within each event presented by Mr. Bravo and his crew, the showmanship and the action delivered by the athletes.

The 19th edition of the EBI brought forth many familiar names of the jiu-jitsu world, including well-established athletes such as Oliver Taza (#1 seed), Nick Ronan, John Combs, Pablo Lavaselli, as well as rising talents David Garmo and Alan Sanchez.

Despite the many submission victories, there were no easy runs to the final as all brackets were very well equipped with talent, with matches running at a high pace. Even within the clashes that did not end in submissions.

From this packed tournament a champion had to arise, and that champion was Alan Sanchez of team 10th Planet San Mateo. Despite not being the most dominant athlete on the mat during regulation (particularly after round 1), Alan had in his submission defense and offense his strongest tool, and a tool he used spectacularly in the overtime rounds against two athletes we saw as the favorites to reach the final, Pablo Lavaselli and Oliver Taza.

In the end, a very hard-fought tournament and a tremendous feather in Alan Sanchez’s cap, who should earn a bump in the rankings real soon. Also a great “warm-up” for the 10th Planet athlete ahead of the ADCC West Coast Trials.

Ah, the ruleset. Always the ruleset. Despite the tremendous show presented, from an entertainment standpoint, we must underline how the EBI ruleset so often fails – in our opinion – to bring out the most efficient fighter. This becomes more apparent when we assess the stats of the EBI 19 event, particularly from the semi-finals onwards (below), a “feeling” that was corroborated at this weekend’s Emerald City Invitational where – again – often those who displayed the more aggressive and accurate jiu-jitsu skills ended up not advancing due to the OT rule.

But back to yesterday. In the first semi-finals of the EBI 19 tournament, we saw Argentina’s Pablo Lavaselli conquer the back position for nearly 5 minutes and, control most of the action throughout the regulation time. Despite the dominant performance, Pablo lost in the EBI OT. Here are the match stats by the numbers: 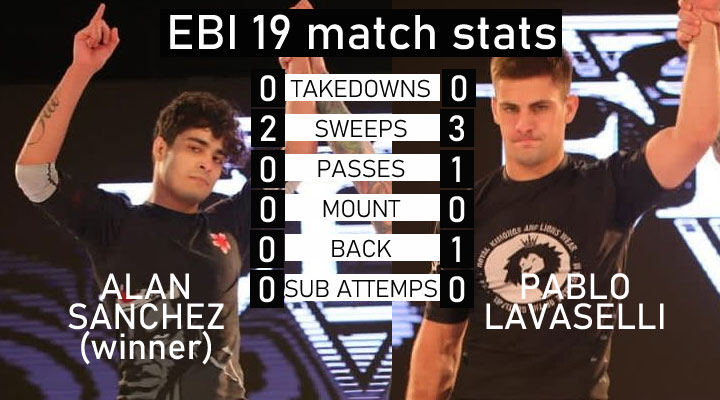 As for Oliver Taza x Nick Ronan, this was an amazing back-and-forward match with Oliver pressing much of the offense and Ronan showing solid defense. Despite this being a balanced match, Taza did press the majority of the time and the OT did not disrupt the event’s flow. 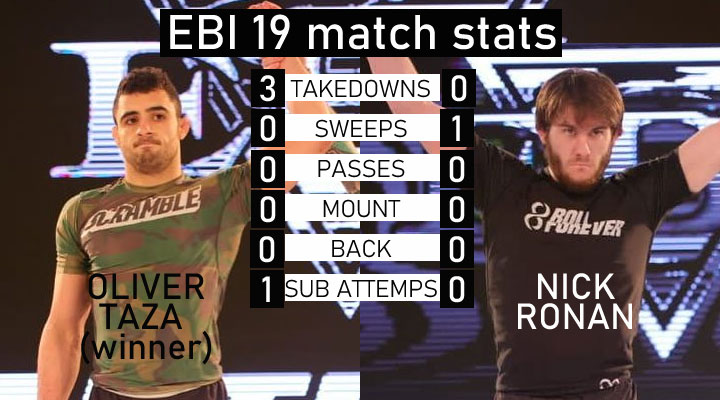 The same could not be said of the final, where Oliver Taza came in strong, not giving Sanchez many opportunities to shine. Despite being on the back-pedal for most of the regulation time, Alan would be crowned the division champion on the OT. 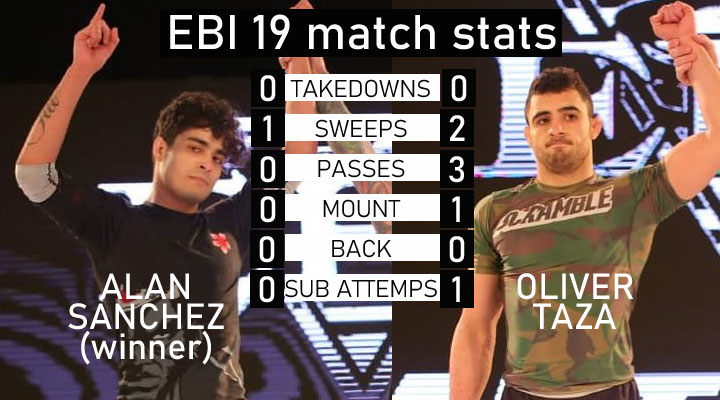 It is worth referencing that these stats should in no way diminish the tremendous work done by Alan Sanchez in his run for the EBI title. Alan is a tremendous athlete who played within the rules and came out the victor utilizing the right tools for the job at hand. We have been fans of Sanchez since his purple belt days and wish to highlight solely the idiosyncratic nature of this ruleset to the sport’s fans.