Over a very short period of time, the Kasai Pro promotion has managed to occupy the space left by the semi-defunct ACB promotion in the grappling world, as the producer of the biggest match-ups in professional jiu-jitsu. This weekend the New York-based company is releasing its 6th Grand Prix, which will be supported by an array of top-shelf match-ups. Below is a preview of what to expect from the big show, next Saturday. 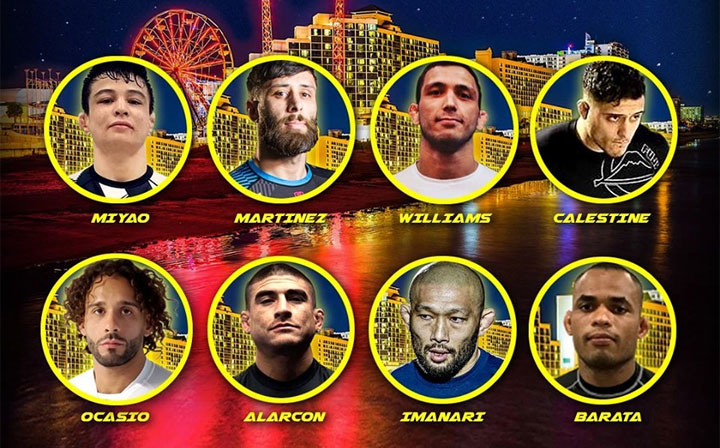 A very interesting talent pool has been gathered for this Grand Prix, particularly with the inclusion of two champions of other promotions, namely Ash Williams (Polaris bantamweight champ) and Jon Calestine (EBI bantamweight champion). Although interesting additions to the event, neither Williams nor Calestine will be coming in as the favorite since that burden will lie on João Miyao.

Even though 2019 has not been particularly kind to Miyao, currently standing with a year record of 23-4, João is the most accomplished and complete athlete on the roster. One of joão’s toughest, however, challenges will be Geo Martinez, a rivalry that is gaining some momentum after the latest crash between the two ending in a win to Geo by EBI overtime rules.

Another athlete we will have our eyes on is Richard Alarcon, the most recent addition to the ADCC 66 kilogram division and winner of the Kasai Pro GP trials. Alarcon has a win over Calestine, is very well rounded and could be a threat to the title, as will brown belt Unity JJ Team representative Junny Ocasio.

This is another very interesting side of the Kasai Pro 6, the super-matches, which, in our view, are even more thrilling than the GP line-up. Some real gems and possible look into what to expect at the ADCC tournament next month.

KAYNAN DUARTE x YURI SIMÕES
Heavyweight – no weight limit
Two big players on the ADCC 2019 roster at +99kg will meet first under the Kasai Pro ruleset in a match that may dictate a lot of what we could expect at the big tournament. The style clash is perfect, Yuri loves a good scrap and Kaynan is a fantastic counter-grappler who tends to shine when facing aggressive opposition.

Both have very good wrestling, but the advantage here might go to Yuri. Kaynan, on the other hand, is the more well rounded of the two. Truly intriguing match.

MATHEUS DINIZ x JOSH HINGER
190 lbs – 86 kg
Another outstanding match with ADCC implications here. Both Hinger and Diniz are on the 88 kg division of the ADCC and are seen among the main candidates for a gold medal there, next month. Both have very good takedown skills, and none is known for playing guard. As such, we can expect the winner to emerge from a standing exchange. Who that will be is anybody’s guess.

TOM DEBLASS x ANDREW TEVAY
Heavyweight – no weight limit
We don’t know a whole lot about Andrew, but he is a large enough man to give anyone a run for their money. Size aside, we expect DeBlass to have a massive upper hand over the younger Tevay in technical ability and high-level experience. Key factors that should get him the W here.

MURILO SANTANA x JONAVIN WEBB
185 lbs – 84 kg
Santana is a well-established grappler with nearly 15 years of black belt experience and a well-known pressure passer. Webb, on the other hand, is a mixed martial arts fighter with a wealth of experience inside the cage. We don’t have any knowledge of Jonavin’s grappling.

Typically the undercard will not bring too many familiar faces to the mats, but the Kasai Pro 6 has truly outdone themselves here, with more than a handful of top-notch grappling on order. Among the top prospect matches we would like to point to this battle of veterans – Nakaphan Phungephorn vs Daniel Tavares, and also some of the new generation’s top competitors: William Tackett, Lucas Protasio, Jeferson Guaresi, Italo Moura, Grace Gundurum and more.