THEY ARE BACK! One of the top grappling events on the planet is back in business with the 10th edition of Britain’s most prestigious event, the Polaris Jiu-Jitsu Invitational, who will be returning to the town of Poole, England.

To celebrate their 10th spectacle, the promotion is featuring 3 major title showdowns, clashes that will pair some of our sport’s most exciting talent for the middle, light, and featherweight titles. In typical Polaris fashion, the matchmakers have left no grey cell unchecked for this cleaver line-up, particularly when it comes to the main event. An ‘out of the box’ type of thinking that has kept this company head and shoulders above their competitors. We are referencing the match between the California Kid, Urijah Faber, and Jersey’s rising star Nicky Ryan, a West Coast vs East Coast challenge that has all the ingredients for top-notch entertainment. 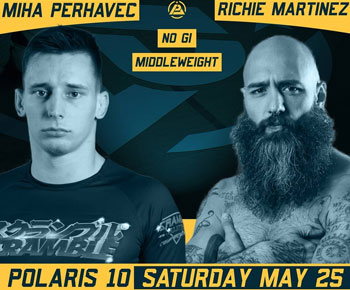 RICHIE MARTINEZ x MIHA PERHAVEC
Middleweight (83.9 kg) NOGI
One of the rising stars of the Polaris promotion is Perhavec, the Slovenian brown belt and citizen of the world, known for his love of leg locks and for being the training partner of a wide range of established black belts such as Sebastian Brosche, Keenan Cornelius, and Darragh O’Connail to name a few. Although well known for his leg-lock game, Miha is well rounded and plays well from a top position.

On the opposite side of the mat is Richie Martinez, one of the most loved athletes in the game who brings a ton of killer instinct when on the mat. Typical of the 10P system style, Richie has a high percentage use of the rubber-guard and omoplata type laces, bringing a wealth of experience to a big stage such as Polaris, experience that may come in handy against the younger Miha. If there is one kink in the American’s style, is his weaker guard retention game, something Perhavec will seek to explore.

Great match-up here. These two athletes know how to put on a show, and we expect nothing but class and excitement. 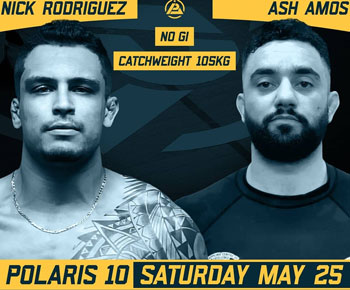 ASH AMOS x NICK RODRIGUEZ
Catchweight (105 kg) NOGI
Welshman Ashley Amos is a judo black belt and a brown belt in jiu-jitsu with plenty of experience under a wide set of rules. A two time Polaris veteran, Amos will be facing a man whose name recognition will definitely raise Amos’ stock value if he beats the American.

The American we speak of is none other than Nicky Rod, John Danaher‘s newest exciting ‘project’. Rodriguez had a strong performance in February at the ADCC trials, particularly against Casey Hellenberg and Jimmy Frederich – two very knowledgeable veterans of our sport. Aside from what we saw at that tournament, we do not have too much information on his skill set as we had not heard of Nick prior to the event. What we do know is that Rodriguez has solid wrestling skills, is very fast for a man of his size and has an uncanny dislike for anything that covers his torso.

Amos has had good performances in Polaris and Nicky Rod also impressed us at the ADCC Trials, going on those references, we expect to see a good match here. 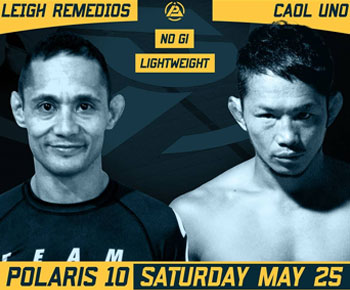 CAOL UNO x LEIGH REMEDIOS
Lightweight (70.3 kg) NOGI
Very evenly matched backgrounds between these two big references of the MMA world. Both UFC veterans, legends in their respective countries and both with a shoot-fighting background.

Most of those who followed MMA during the early 2000s will have a clear idea of who Caol Uno is: A former UFC Lightweight Tournament champion, Shooto Japan champion, who had two iconic lightweight title matches against Jens Pulver and BJ Penn while also competing in the ADCC.

Around the same time as Uno, on the opposite side of the world, Remedios was working on his own career as a pioneering cage fighter in Europe, as well as a grappler who and founder of one of the best submission-wrestling camps in England. We have not seen Leigh in action in a long time, but expect that, with the hometown advantage, he can bring the best version of himself to face the highly accomplished Japanese wrestler. 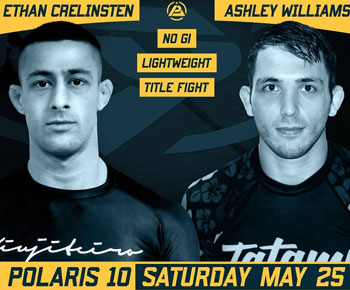 ASH WILLIAMS (Challenger) x ETHAN CRELINSTEN
Lightweight (70.3 kg) NOGI
A great match-up between Wales and Canada on the horizon. As submission-grappler Crelinsten’s star continues to rise in the nogi world, he is now faced with one of the United Kingdom’s most experienced athletes.

Although the underdog of the match, Williams shares much of his namesake’s resilience, the hero of the Evil Dead film franchise, by shining brightest when faced with adversity. This has been evident in Ashley’s last 3 wins, which were over big names of the sport such as Frank Rosenthal, Ben Eddy, and Masakazu Imanari.

To conquer Polaris’ lightweight strap Williams will have to go through his toughest challenge to date, the formidable Ethan of TriStar / Renzo Gracie. Crelinsten is physically the stronger of the two and has looked unstoppable for a while, particularly at the ADCC East Coast trials. Good from top and bottom, Ethan will be the favorite here but expect Ash to put on a good challenge. 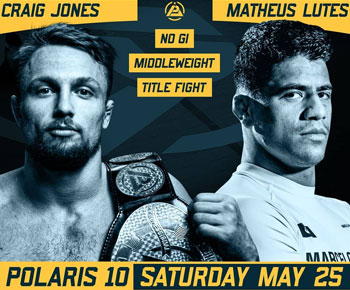 At a glance one could be under the impression that a brown belt would not have a place on the mat against submission grappling’s best leg locker, but if you assumed that, you assumed wrong. Matheus is not your average brown belt and if there is one thing Polaris has always impressed us with, it has been with their matchmaking so you can expect Lutes to be quite the challenge.

Originally a ‘guillotine guy’, Jones transformed into a bottom player during his brown belt days, with a roll of offensive options from Z guard. More recently Craig has been trying to recreate himself as a guard-passer with incredible success. Lutes, on the other hand, is a well-rounded grappler but will shine brightest when on top, where his athleticism can work in his favor. We believe that much of this match’s outcome will rely on the stand-up: If Jones manages to establish top position, he will have the easier path to success. If Lutes conquers the top game, he may frustrate Craig with his defensive tactics, although Jones will start as the favorite here. 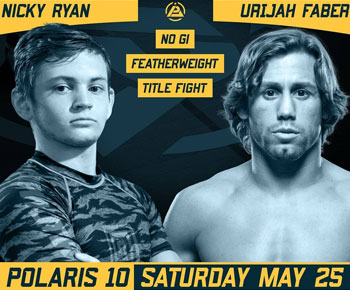 URIJAH FABER (challenger) x NICKY RYAN
Featherweight Title Match (65.8 kg) NOGI
The headliner of P10 will be the title match between UFC Hall Of Fame inductee Urijah Faber and 17-year-old submission grappling phenom Nicky Ryan, who will see his 3rd MMA veteran match-up in the promotion. Although both previous opponents (Phil Harris and Masakazu Imanari) were somewhat easy preys to Ryan’s superior skills, Faber is coming in with a vastly more impressive level of accomplishments than Harris and Imanari.

With a roll of historic fights on the cage, being an ADCC veteran who went to overtime with Paulo Miyao in a grappling match not long ago, Urijah’s poses some interesting challenges to Ryan. Great endurance, speed, body awareness and experience will be among Faber’s main assets for victory, although Nicky will still be a heavy favorite to win the match, and, unless Ryan slips into a guillotine, we don’t see many ways for the ‘California Kid’ to submit New York’s (actual) Kid.

All in all, expect a good bout between these two. Faber is not known to backpedal and Ryan thrives best with an opponent that brings the fight to him, the perfect combination for a fun grappling exchange.