The biggest professional grappling show in the United Kingdom is back this year for its 12th card, on November 30, 2019, a journey that started for the England-Wales coalition back in 2015.

This event also marks the return of Polaris to Wales, one of the promotion’s headquarters – the other being Poole, England.

The show will take place at the beautiful ICC in Newport, featuring Polaris’ traditional mix of local talent and international names, including a fantastic bantamweight title match, one of the very best fights currently to be made at this weight class, between current Polaris lightweight champ Ash Williams and Unity’s foremost representative João Miyao. Below is a preview of the main show. 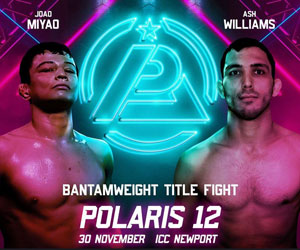 As we mentioned before, this is, arguably, the best match-up to be made in this weight class. Current Polaris lightweight champion Ashley Williams will be dropping a substantial amount of weight to make the bantamweight division and should have a size advantage over one of the most highly rated athletes of a generation, Mr. Miyao.

Williams is one of the best scramblers in the game right now. The relentless pace set by this young Welsh athlete tends to overwhelm his opponents, but that will be unlikely with Miyao, who himself loves to press the action.

These two competitors had a real battle at a different promotion earlier in the year, which ended in a draw, and we are very excited to see what will come of this affair. This and Langaker vs Durinho have all the ingredients for a Fight Of The Night title. 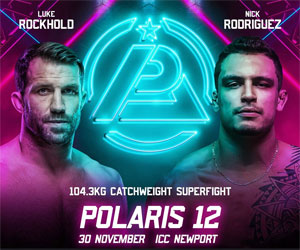 Both athletes have great market value and name recognition. Rodriguez is particularly more familiar to the jiu-jitsu crown thanks to his ADCC silver medal this year. A member of the Renzo Gracie Academy, Rod has powerful takedowns and tons of aggression as well as the athleticism to back it up, but he lacks the jiu-jitsu finesse and overall control of his training partners in the DDS training camp.

We’ve heard that former UFC middleweight champ Luke Rockhold is a fantastic grappler though we’ve not seen him compete under that ruleset in the past, as such he is a complete riddle here, as is the outcome of this match. 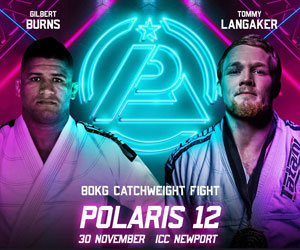 Overall this main card is very well put together with some potential barn-burners, Langaker vs Burns is certainly one of those.

It is also with great enthusiasm that we see a gi match on the main stage at Polaris. With quality matches like this, we are sure to see the promoters come back to the gi again in the future.

Style-wise, Langaker is one of the most offense driven men in grappling today, particularly from his guard, while Durinho’s MMA experience has transformed the former guard player into a thrilling guard passer. It has been some time since we’ve seen Gilbert with the gi on, but he does get to train with the Musumeci’s, so we expect him to be very up to date with the more modern game of Tommy. Nonetheless, we give the advantage to the Norwegian World silver medalist here. 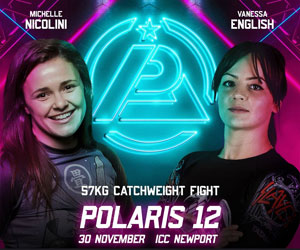 We were very excited to see the return of these two women to the Polaris stage.

None of these women is currently going through the gauntlet on the international circuit, their careers are fully solidified and they compete mainly out of love for the game. That does not mean they are not still in tip-top shape, Nicolini with a thrilling MMA career and English who is focussing on coaching.

A brilliant mind of this sport, Michelle is also one of the GOATs of female jiu-jitsu – something BJJ Heroes alluded to here. Vanessa, on the other hand, is one of British jiu-jitsu’s foremost pioneers as well as a former European Open champion.

On paper, Michelle is the favorite. She has a vastly superior resume and has been more active than Vanessa. That, however, doesn’t always mean much in super fights such as these. Vanessa is younger and a very crafty competitor who might even be hungrier for the win, given how much her stock would rise if she did. 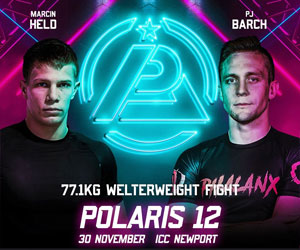 Every time we see PJ Barch on a card, we are excited and sure there is a great scrap ahead. One of, if not THE, most talented athlete to come out of the 10th Planet camp, Barch is a full package. Leg locks, passing, back takes and takedowns, this young man has it all.

Unfortunately, PJs career has run into a few ups and downs due to his injury, which placed him out of the ADCC and a few other exciting events this year. Nonetheless, Barch is back and his opponent is none other than Polish MMA fighter Marcin Held, previously with the UFC.

Held is well known for his leg-lock entries and the fast pace he likes to set on his matches. An interesting challenge for Barch and a good player to test the waters against after an injury, though possibly not the best if that injury just so happened to lead to a major knee reconstruction. Expect Barch to be the more refined grappler here, but his long absence could play a big factor also. 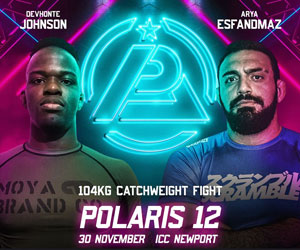 An interesting match between two big dudes who prefer to keep the top position. Arya has good judo against Johnson’s more well-rounded game (top and bottom). Neither of these men is particularly aggressive with their submission hunting but they do like to move, so expect to see more of positional grappling on this one.

There’s is hardly ever a dull moment in Polaris’ prelims, a tradition Polaris intends to keep with their 12th show.

One of the matches to watch here will be the return of Espen Mathiesen to jiu-jitsu’s spotlight against Jenkins a brown belt under Darragh O’Connell and the head coach at the CF24 gym – the same academy where Ffion Davies started her career.

A very different type of clash but equally as exciting is the leg locker’s battle between Australia’s new rising star Jeremy Skinner of Absolute MMA and England’s Eoghan O’Flanagan. Quite the test for the Brit who has been doing well in England’s tournament circuit.