Out of Palm Beach Gardens in Florida is a martial arts team that’s been turning quite a few heads its way in the grappling world. That team is Gamblers Jiu-Jitsu & Kickboxing. The club first caught our attention through two of the brightest stars in our sport at the black belt level, Amanda “Tubby” Alequin and her husband, Eric Alequin, who compete toe-to-toe against the sport’s best on a regular basis.

A closer look at the team and you will see this workgroup is not restricted to the well known Alequin duo, there is a ton of potential in the team, climbing through the ranks of our sport. From 24-year-old Colon Santana, also known as “Toro”, a prolific brown belt in gi and no-gi who holds 2x IBJJF Juvenile World titles, to teenage phenom Lorenzo Corea and the aforementioned Frankie Ciprianni – who holds 3x Kids World Championships and is a Florida state champion. With so much done already for such a young team, it is easy to forecast a bright future for the Palm Beach Gardens gang. 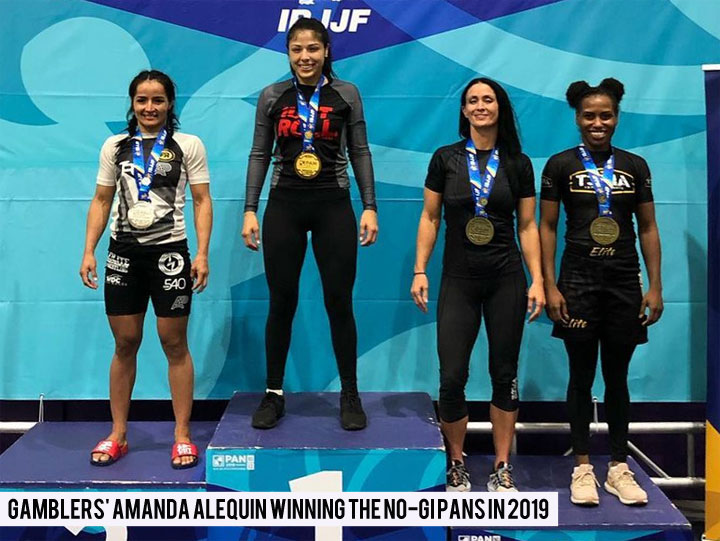 The backstory of the Florida team is equally interesting: Starting out as Gamblers Sports a decade ago, the organization was first fully dedicated to baseball, developed as a vehicle to keep local kids out of trouble by providing training and all the resources required for these children to reach their full potential. While developing the program, the Gamblers owner, Mike Ciprianni developed an interest in Jiu-Jitsu together with his son Frankie, which quickly escalated into a full-scale passion for grappling. That love led Mike to down the path of Jiu-Jitsu academy ownership, a project he started alongside his friend Jarrod Anderson, then giving birth to the Gamblers Jiu-Jitsu Academy.

Both Ciprianni and Anderson had a close relationship with coach Johnny Faria (currently the head of Alliance San Diego). This bond with Faria allowed the team a solid connection with other grappling talents, particularly Mike Rodriguez and Eric Alequin (who are black belts under Johnny). With Alequin came Amanda (a black belt under Márcio Cruz) and her brother, “Toro” Santana. Soon enough the recipe for a successful team was all laid out, it was a matter of time until the Gamblers’ students started breaking through.

Currently, the coaching team is set up with instructors Jarrod, Eric, and Amanda at the helm of the competition group, and Mike Ciprianni as the team’s strategist. The plan has led them to breakthrough across a multitude of platforms, from the IBJJF circuit to F2W’s professional stage, and although with smaller numbers of students, when compared to Fight Sports – Florida’s biggest jiu-jitsu franchise – Gamblers have now consistently gained traction as one of the state’s foremost talent producers.

We will keep an eye out for team Gamblers as we expect great things ahead.