Where Does Atos’ Female Success Come From? Angelica Galvão Interview

Last year, Atos became a two-time World Champion team (male division) in Jiu-Jitsu, and although the world title returned to Alliance’s hands in 2019, this year Atos’ female team became world champion for the first time in a historic event for this workgroup.

Led by Angelica Galvao, Atos had finished the World Championship in the 6th place last year but returned in full force for 2019. Alliance and Gracie Humaita who fought for the 1st place on several occasions, this year could not beat “Angelica’s Army” – the nickname given by her students to the team, as they brought the title back to Atos Jiu-Jitsu HQ in San Diego, California.

Although with important silver medals – Luiza Monteiro and Bia Basilio in the black belt division, Atos guaranteed its first place through the amazing performances of its blue, purple and brown belt squads, with athletes such as Iasmin Casser (blue belt, Mendes Brothers’ student), Jessa Khan (purple belt, Mendes’ student), Heather Morgan and Crystal Gaxiola – who got their brown belts on podium – and Rafaela Guedes (brown belt gold in heavy class and bronze in open class).

But where does Atos female success come from? According to professor Angelica Galvão: “Excellence comes from offering to my client what he came to collect. That makes all the difference“.

Angelica has taught women’s classes for the past 5 years, ever since she was promoted to black belt by her husband, André Galvão. “I confess I never had an interest in teaching classes, and never taught classes until then, but like most major things in my life, Andre always challenges me to go above and beyond. The women’s program was small in the beginning and I had 8 to 10 girls per class“, said the professor. “Two-times per week, one of the mats at Atos HQ is available for them. It’s a class that mixes basic and advanced movements to give a chance to reach new students and still feed something to the senior ones, so they can learn and contribute in class.”

For Angelica, training with women brings a different reality to the athlete, defending her perspective by saying that: “Weight, size, and strength have an influence. If they didn’t, weight classes and divisions wouldn’t exist. It’s a huge benefit to have a great group for women to train with“. But despite believing in women’s only training, she also thinks it’s important to encourage girls to train in regular classes.

“The woman with no background in the sport can feel intimidated depending on the environment of the gym. My focus is on showing jiu-jitsu in a healthy, interesting, efficient and challenging. Over time, I encourage them to participate in regular classes“, she said.

Being a black belt and dividing the team’s leadership with André, Angelica believes to be an strong asset for bringing in new students. “Being the owner of the gym, a black belt woman, it helps a lot, because I know what a woman is looking for in the gym. Then, I apply it on the team“, she said.

The respect shared between herself and André, Angelica believes is reflected in the group, making the environment more family friendly, pleasant and safe. “I put myself as a client and a critic. I analyze and ask if I’d like this place if I enter here for the first time if I would feel comfortable to leave my 12-year-old daughter there and go out to have a coffee. That’s my focus“, she said.

THE TIME THEY CONQUERED THE MAIN MAT

What was small in the beginning, has tooken massive proportions. A few weeks before the World Championships, Angelica published a picture on her Instagram account celebrating a record: 43 students.

Atos has 2 mats available at any given day, one of them is the main/bigger one, the other is smaller and where the female class regularly takes place. Regularly the female classes take place at the same time as no-gi, which is taught by Andre. That day, however, the female class moved on to the main mat in a Insagram worthy moment. 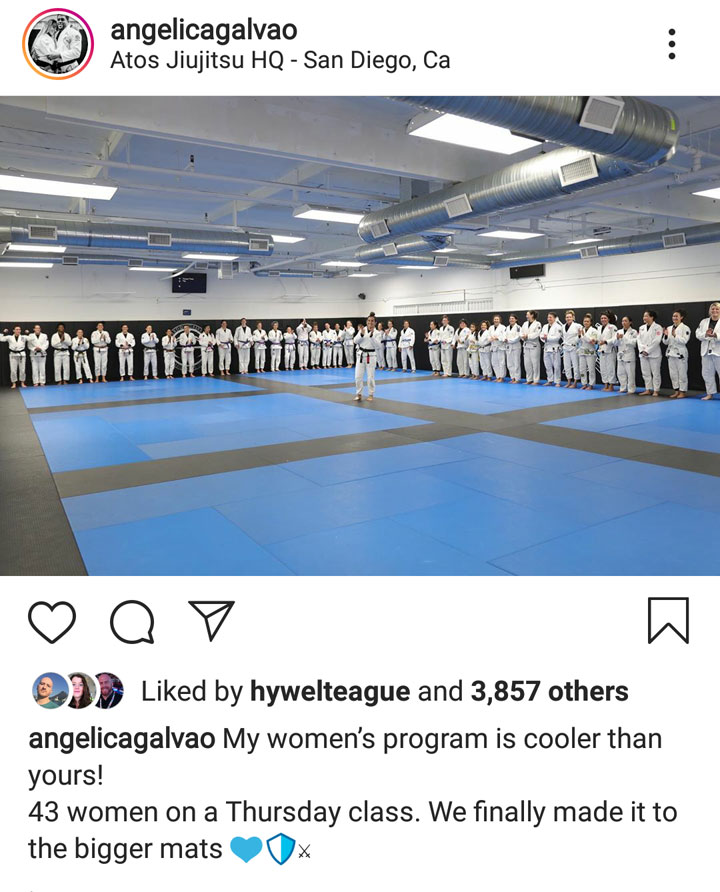 “He [André] gives a lot of support and attention to the women’s workgroup. We always joked with him saying that one day the big mat would be ours. That day, we were 43 girls. And he said: ‘you could use my mat’. It was an honor“, Angelica remembered.

Galvao also referenced that, for her, five years on, what has changed is the number of students. Nowadays, she has an assistant to help her in classes. And for those who think starting a class is hard, damn it! You are right – “I’ve always given my best, even when there were only a few girls. I’ve taught classes for only 3 girls, but I’ve always done it with excellence as if there were 100 girls on the mat. Nowadays we have 2 class per week. And I have an assistant. There are girls from beginner to advanced with different goals. Although jiu-jitsu is the same, it has to be presented in a different way“, she said.

About the world title, Angelica referenced that: “It’s team title. Without good leaders, who value and are inclusive of female jiu-jitsu, we would not have reached it“, although she is not the sole culprit in this title as many students who competed for Atos, train in outer branches of the Atos team.

Angelica recognizes her effort to make the team grow, but she doesn’t forget to mention: “Somehow, I represent the female jiu-jitsu in Atos. I know I opened the doors and somehow, I have my contribution to the sport, but without the whole group, nothing would be possible“.

The professor and leader of the team said in an interview to Jiu-Jitsu In Frames (YouTube) that she gave up on the athlete career to focus on the gym and therefore she won world titles in purple and brown belts, didn’t do it on black and hitch it to something bigger: “I feel honored and fulfilled. The world title in black belt is something I didn’t achieve, but I make the victory of each one of them my victory and my world title“.

The original version of this article, in Portuguese, can be read on the ESPN Brazil website, here.