Flying under the radar of the grappling media is one of the most successful colored belts of jiu-jitsu’s new generation, Junior Fernandes, also known as Juninho, of team Checkmat. The 20-year-old purple belt conquered 2 IBJJF World titles (gi & no-gi) in 2021 which he added to his previously obtained 2019 blue belt World and Pan Championships gold medals.

Unlike the majority of athletes currently competing and winning on the international circuit, Fernandes is neither Brazilian nor American. Junior is the son of Portuguese parents of African heritage and was born in East London, England.

Drawn to martial arts at an early age by the influence of his father, the 3x MTGP Muay Thai World Champion José “Pitbull” Varela, Junior’s very first sporting love lied elsewhere, in soccer (football): “growing up in London every boy’s dream was to become a footballer” Fernandes explained. Indeed, the love for the football pitch ran deep in the Fernandes household as proven by Junior’s younger brother, Raheem, who is currently climbing the youth ranks of that sport. For Juninho, however, the love for kicking people greatly exceeded his fascination for kicking air-filled balls: “My first passion with martial arts came through Muay Thai in Clapton Pond (Hackney)”, the gym where his father trained, Fernandes explained to BJJ Heroes in an interview earlier this month. “I really enjoyed the hustle, the discipline, perseverance, and dedication that Muay Thai and BJJ gave me. They have shaped the person that I am today. I started at the age of 7 in Thai, competing and training until I was 13.”

When Junior Fernandes was 13-years-old, his father, José, became the head Muay Thai coach at Fightzone London, one of the country’s prime martial arts training centers, where the young Londoner was introduced to jiu-jitsu: “That’s where I met my professor Marco Canha [Fightzone’s head jiu-jitsu instructor]. I don’t remember exactly how I got into jits but I do remember Marco was always welcoming with open arms. Somehow, someway, he managed to persuade me to try out a jiu-jitsu class and the rest is history. [laughs]”

Walking a different path from many modern-day grappling competitors, Junior’s start in jiu-jitsu was not an easy one, as the success he had found in the ring did not immediately translate to the mats.

“I found it very difficult in the beginning. Competing. Man, I remember younger ‘J’, all my training partners were winning gold shiny belts at every competition – including my younger brother – and I’d always lose. I’d be lucky to even place on the podium and receive a medal.” The self-imposed pressure of success and failure to do so, nearly drove young Juninho to quit the sport, as explained by him:

“I’d cry all the time to my mother. I was frustrated, all I wanted was to be on the highest spot on the podium [laughs]. Taking L’s after L’s sometimes even to the same opponents more than once in one day, it almost made me quit.” but family support and his coach’s belief held him in the sport during these hard times, “My mum and Marco still had faith in me, that’s what kept me going“.

Although struggling to find his way on the competition scene during these early jiu-jitsu days, Fernandes was going head to head with the higher belts at his gym; it was just that, in his own words: He “couldn’t execute at the competitions.” 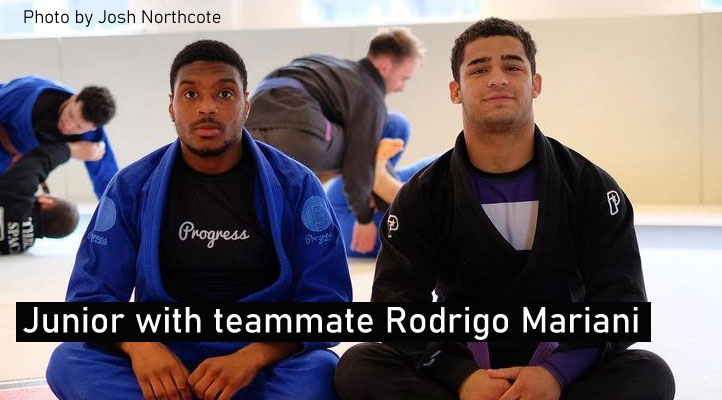 That day eventually came. “Finally, towards the end of my kids’ belts, as an orange belt, I started picking up momentum. I don’t know what it was but something had flipped a switch in me, mentally. To grind it out. As a juvenile blue belt I was competing at the adult divisions in the UK, then, eventually, me and my teammate and friend, Rodrigo Mariani [also a 2021 World No-Gi Champion] were traveling up and down the country closing out absolutes in adult divisions as juveniles.”

After finishing his secondary school studies (A levels and GCSES), the time came to make a decision. To further his studies at a university or follow his grappling dream, a hard decision for many, but not for the Fightzone talent.

“I thought that attending university or furthering my education would be a waste of my time. My peers were competing constantly and I was left behind.” The choice had been made, to push for jiu-jitsu as his career. “I’m young, fresh, and hungry to win everything and beat everyone to get where I want to go.” 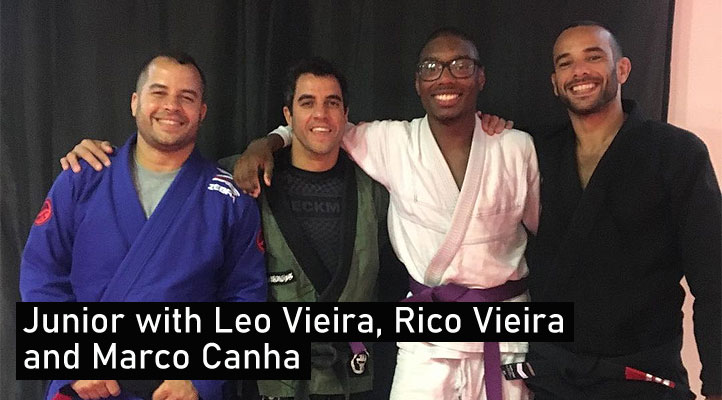 Unlike many households, where such a decision would be received with scalding criticism, the choice was met with enthusiasm by those around Junior, “I always had a strong rapport with those close people who believed in me. That I could do well anywhere I fought, even when I didn’t have the confidence in myself. For this, I’ll be forever grateful to my mum, Marco, my grandparents, my brother, just to name a few.”

To prepare for the big shows of 2021, both of the IBJJF’s World Championships, Junior Fernandes opted to travel to the United States and make the most of Fightzone’s link with team Checkmat and the network the club has in America.

“Man, there’s no comparison“, he said about the level of training in the US. “There’s a reason why I left the UK to accelerate my skill and progress as an athlete, América & California, in particular, is the Mecca of jiu-jitsu right now (…) at Checkmat HQ and Checkmat La Habra led by professors Leo Vieira and Lucas Leite, with all the high-level training partners here, I know I’m at the best place to keep growing as a competitor.”

The opportunity to travel, with all the expenses and logistics that such a move demands, was greatly owed to his London team. “I will never forget my roots and who got me here. I’ve been fortunate enough to be able to teach at Fightzone and grateful to James (Roach), Marco (Canha), and Cristina (Sempere) for allowing me to do so.”

Although with many talented grapplers, England is yet to produce an adult black belt world champion. With strong support from those around him, his natural talent, and drive, the sky’s the limit for this young Londoner who could, one day, bring that most coveted of BJJ medals to The Big Smoke.