Elder Cruz, commonly known as “El Monstro”, is a Honduran-American professional grappler and a black belt in jiu-jitsu under coach Lucas Leite, who represents the Checkmat team on this sport’s international circuit. Cruz first made waves in the sport as a colored belt athlete while competing in the International Brazilian Jiu-Jitsu Federation (IBJJF) league and in important no-gi jiu-jitsu events such as the SUBVERSIV Invitational and the ADCC American Trials where he conquered several important wins.

Nickname: Unlike many Brazilian/Portuguese nicknames which are traditionally founded on the friendly mockery of someone’s physical or personality attributes, “El Monstro” – the tag commonly associated with Cruz – was a self-imposed, planned nickname, much like it happens in the world of MMA or boxing.

The world of combat sports entered Cruz’s life at 12, as a freshman at the La Habra High School, when he joined the institution’s wrestling team. Elder spent 4 years competing for the Highlanders, making the team’s varsity squad and the CIF State tournament in his senior year after taking the Freeway League crown, a CIF-Southern Section Southern Division championship, and a second-place finish at the CIF-SS Masters Meet.

After finishing high school, Elder Cruz set his sights on mixed martial arts, joining Jeff Nolasco’s UFC gym in La Mirada in March 2018. It was through this relationship with MMA and in his attempt to improve all areas of cage-fighting that Cruz started paying more attention to jiu-jitsu and the competitive opportunities available in that sport.

While trying to further develop his ground skills, Cruz discovered Lucas Leite and his Checkmat La Habra gym, one of the top grappling academies in the country. After his early interaction with coach Leite, Elder became more focused on jiu-jitsu’s competitive scene and slowly faded away from his MMA ambitions to pursue BJJ.

Elder Cruz quickly gained notoriety at an international level as one of the rising stars of the sport earning all belts under Leite, who also promoted Elder to the black belt rank in July 2022. 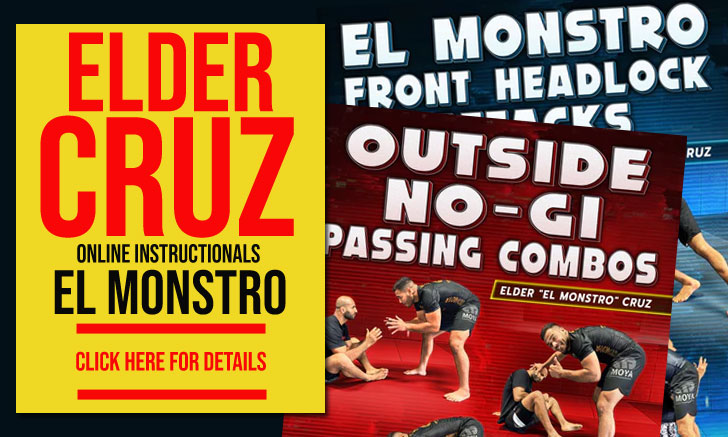 Traditionally BJJ Heroes only records black belt match results, in Cruz’s case, however, he’s been competing against top-tier black belt competition from his brown belt days in professional events against other pro-athletes, with some memorable matches there. Alves was also an important player at the ADCC US Trials, all results we felt should be included in his professional record, despite his brown belt rank at the time (prior to July 2022).