Gabriel Gonzaga, commonly known as Napão, is a Brazilian jiu-jitsu black belt under Wander Braga, and a former professional mixed martial arts (MMA) fighter who competed for the Ultimate Fighting Championship (UFC) heavyweight belt in 2007. As a grappler, Napão gained notoriety when representing the Macaco Gold Team Academy during the early to mid-2000s, a time when he conquered an International Brazilian Jiu-Jitsu Federation (IBJJF) World Championship title (2006) as well as a silver medal at the ADCC (Abu Dhabi Combat Club), two of the most prestigious tournaments in the sport.

Nickname: “Napão” is the Portuguese slang word a Broad/wide Nose.

Martial arts became part of Napão’s life by the time he turned 14 years of age, starting with judo – a sport he played very briefly before finding jiu-jitsu as a 15 YO (1994).

Coach Wander Braga of the Jorge Pereira Academy was Gabriel’s coach from the very get-go, guiding Napão through the ranks of jiu-jitsu where he became one of the main figures in the colored belt divisions of the sport, later, in 1999 awarding Gonzaga his black belt after a 3rd place performance at the IBJJF World Championship by Gabriel.

Once coach Wander Braga moved to the United States, in 2000, it did not take long until Napão moved to São Paulo (2002) where he joined Jorge Patino‘s academy – Macaco Gold Team. In SP, Gabriel Gonzaga established himself as one of the region’s top black belts, while also conquering important events on an international level, including 2 world titles (CBJJO and IBJJF) as well as a silver medal in the ADCC.

It was also while living in São Paulo that Gabriel Napão developed an interest in MMA, making his debut in 2003, while still giving priority to his grappling career. During the mid-2000s, however, Jorge Patino joined the famous Chute-Boxe MMA academy, in Curitiba, Brazil. Seeking to better his own cage-fighting skills, Gonzaga started traveling to the renowned Thai boxing team’s headquarters.

During May 2006, Gabriel was signed by the Ultimate Fighting Championship – UFC, going on a series of wins that earned him a title shot in August of the following year. The work with the UFC led Napão to move to the United States that year, training in a variety of different gyms prior to forming his own jiu-jitsu association. 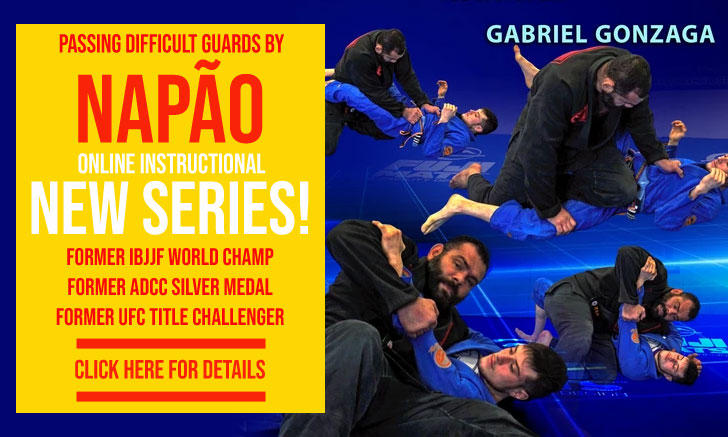