Juliana Vieira Borges is a judo and jiu-jitsu black belt as well as a former freestyle wrestler who made history in both BJJ and wrestling during the 2000s decade, as a competitor, by being the first woman to win double gold medals at the ADCC World Championships (2005) in the process earning also the title of first female open weight champion in the prestigious grappling tournament. This while also earning a gold medal in the freestyle wrestling Pan American Championships, being the first Brazilian woman to achieve the podium in this event. During her athletic career, Juliana Borges excelled in all three sports, being particularly successful in jiu-jitsu after earning world titles across 3 organizations in both the Gi and No-Gi disciplines.

Juliana Borges was born on July 31, 1977, in Goiânia, the capital of Goiás state in central Brazil.

Growing up Juliana played a number of sports, the first of which being swimming, an activity she started at the age of 6, going on to practice and compete in it for a number of years, up until her 22nd birthday. During this period Borges conquered important trophies such as the Goiania title, the Minas Gerais state title (neighboring state to Goiás), University Games, and 3 gold medals in the Brazilian National Swimming League.

Gymnastics were added to Juliana’s extra-curricular activities when she was 10 years old, a sport she relinquished two years later in favor of judo. Her father, Joao Batista Alves Borges, and uncle Sebastião Batista Alves Borges were lifelong judoka who gradually induced in Juliana the love for the Japanese grappling style before signing her on to classes during 1990.

Under the guidance of Sensei Júlio César of the SESI Campinas gym, and later coached by her own uncle, Sebastião Borges, Juliana became a successful judo athlete earning state titles in both Goiás and Minas Gerais on 3 occasions as well as the Brazilian Nationals with the Liga Nacional de Judô. Later, while studying odontology at the Uberaba University, Borges followed the guidance of Sebastião Leite of the Oriênte Judo Club, receiving her black belt in Goiânia, from her uncle in 1997.

While living in Uberaba and practicing judô with her University’s team, one of her training partners, Ricardo Fontenelle, who was a jiu-jitsu blue belt, proposed to the workgroup a separate schedule to focus on jiu-jitsu style groundwork (newaza) under his tuition. This was Juliana’s first contact with BJJ in 1998/1999. A competitor at heart, Juliana wanted to test her skills in jiu-jitsu, being awarded the rank of blue belt by the federation due to her high-level judoka status.

After finishing her degree, Borges returned to her hometown where she continued learning jiu-jitsu with Fernando Boi, one of the state’s most successful grapplers. It was he who promoted Juliana to her purple, brown, and black belts, the latter in a ceremony that took place in 2004.

Fernando Boi was not only a BJJ competitor, but also an avid freestyle wrestler in the state of Goiás, and it was through him that Borges gained an interest in this Olympic discipline, joining Alejo Morales’s workgroup at UFG in Goiania for her wrestling training in 2002. Borges’ vast experience in both judo and BJJ helped her make an immediate impact in wrestling at an international level, as she went on to conquer gold medals in important events, shortly thereafter becoming the first Brazilian woman to earn a medal in the Panamerican Championships for Brazil in 2003. 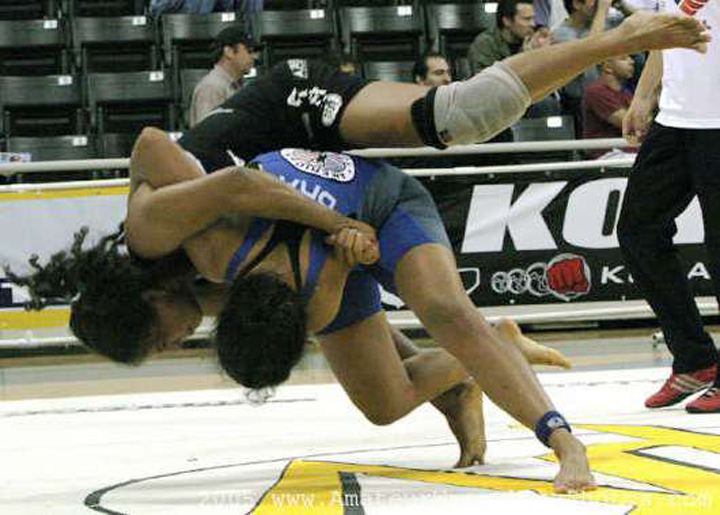 Juliana Borges in Action at 2005 ADCC

In 2005 Juliana moved to the United States in an attempt to focus on her dream of competing in the Summer Olympics, where she worked with wrestling coach Jason Kelly (2005-2009) and joined Ricardo Liborio’s American Top Team. That same year the ADCC, (no-gi jiu-jitsu’s biggest event,) was held in the United States, which included a female division for the first time in the history of the tournament. Already renowned for her work in 3 different grappling sports, Juliana received an invitation to compete in the event and once again prevailed, earning a gold medal in her weight and the open weight classes.

It was also in 2005 that Juliana Borges competed the most and was most successful in a broader range of disciplines and rulesets. One of those memorable victories took place at a NAGA tournament in the US, where she conquered first place in a mixed division (men and women), under Expert rules. 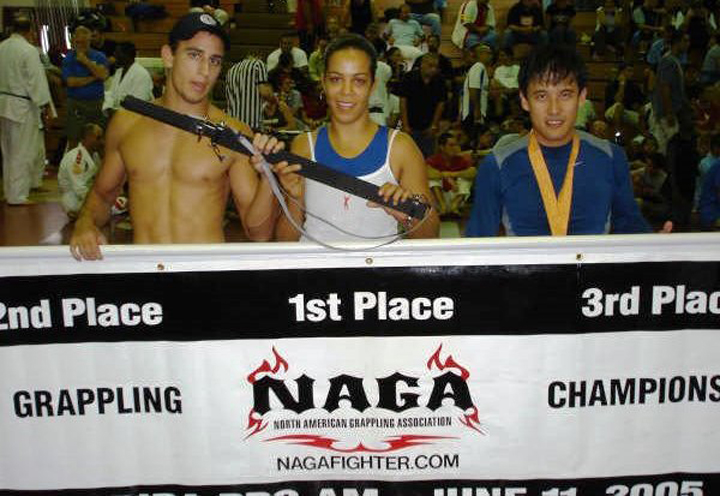 In 2008, while living in the US, the Gôiania native found herself in a tumultuous relationship with an abusive partner. In an interview with the Liga Uberabense de Judô YouTube channel (here) in June 2020, Borges opened up about the ordeal, explaining: “I went through a lot of abuse at the time, both physical and psychological. I lost 10 kilos [22 lbs], became depressed, I lost my desire to train.” Going on to expand on the traumatic experience by saying “I was raised in a loving home, both my mother and father were very kind to each other. I had never experienced this before and I didn’t know how to manage it. I didn’t ask for help. I spent 1 year in this abusive relationship before I had the courage to ask for help. When I did, [Ricardo] Libório came to the rescue. He was like a father to me, took me into his own home, truly helped me. Him and a few others”.

This episode in Juliana’s life was a major step back in her Olympic aspirations, which she addressed in the aforementioned interview: “After this, I thought to myself self ‘how did I let the Olympics pass me by, how did I allow this person to stop me?’ I felt as though I had given up on so much in pursuit of this dream, left my family, my friends. I was very frustrated, but I thought ‘I will bounce back’. I had a couple of months to train for the Mundial [IBJJF Worlds] and decided I would compete at this event, win or lose I would prove to myself I was still alive“. Borges did compete, and after a grueling open weight match, she returned to the mat to compete in her weight class, losing to Kyra Gracie in the semi-finals and earning a bronze medal. This was her last competition as she decided to return home after this and re-built her life there.