One of the most interesting aspects of jiu-jitsu is how it appears to exist in a dichotomy of discourse, a clear divide between the substance of the debate and the trends coming from Brazil – where the sport was born, and the Northern Hemisphere (USA + Europe) where most of BJJ’s industry is based today.

A clear example of this was the recent clash between Alliance Porto Alegre’s head coach Mário Reis and the sport’s female community, which was itself a result of Reis’s most recent school policy of excluding female athletes from his team’s competition training. The debate regarding this measurement generated very heated discussions between some of the biggest names in jiu-jitsu and lit up Brazilian social media over the past week, but was completely missed by the American audience. What sparked this feud? We will try to explain below.

HOW DID IT START? 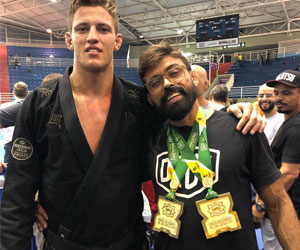 Mário Reis is one of the best featherweight competitors in the sport’s history, having since retired to focus on his coaching career, reaching equal success in that profession. For those lesser acquainted with Reis’s work as a team leader, he’s developed names such as Nicholas Meregali, Fábio Alano (Kamikaze), João Paulo Neto, Murilo Amaral, Moacir Mendes Jr., and countless others. Truly one of the most successful coaches in the BJJ world today.

Now on to the substance of the matter: One of the most well-known training schedules of the Alliance Porto Alegre Academy is the midday sparring class, a session that was set for the workgroup’s competitors. What caused controversy here was that more recently coach Mário Reis vetoed female athletes from participating in such class, with the exception of his ex-wife (former middleweight champ Monique Ellias).

On an 8 minute long leaked audio message to one of his students (Roberta, a regular student of the 12 pm class), provided through WhatsApp, Reis explains that the decision was made to exclude her from that schedule as she did not fit the profile of the class. Going on to say that her inclusion would tarnish the development of the competitors in the room, who would have to go easy when sparring with her when what was required of them was to go 100% during the said schedule.

Mario went on to reference that all other female students, even the competitors, were also excluded from this class and explain that there were at least 5 other daily classes on the school’s schedule to choose from, further clearing up that these female competitors would not fit the level of intensity that is expected from the midday schedule, the exception being Monique Elias and a few other non-professional male competitors who, according to Reis, could take the roughness of the training.

On the other side of this veto were a few female competitors who vehemently disagreed with the decision and went to social media to voice their discontent. One of those voices was that of 2018 brown belt world champion Juliane Wiggers, one of Mario’s black belts.

On her Instagram post, which gathered 2600 likes and over 700 comments, Wiggers – who had not competed since the World Championship, being unclear if she is training at the moment, started out by writing: “Recently my team’s coach denied entrance to all women on the academy’s competition training (only one female will be allowed for reasons I do not know). He alleged that women get in the way of men’s training and that men dislike rolling with females as they are much physically weaker than men. He fabricated this excuse to hide his misogyny”, continuing her message by claiming that she had not spoken to her coach at the time of her rant, asking for women to unite in exposing such acts.

Wigger’s post spread like wildfire and has had plenty of our sport’s highest personalities give their opinions on the matter, the loudest being Mahamed Aly, who spoke about the matter on his YouTube channel, showing his support for the decision of Reis, as well as Luanna Alzuguir and Ana Carolina Vieira, who went on Mayara Munhoz’ podcast this week – Jiu-Jitsu Frames channel on YouTube, to express their opposing views to those of Mario.