Alexandre Vieira is a Brazilian jiu jitsu black belt under Murilo Bustamante, having also worked extensively with Master Paulo Maurício Strauch while being also one of the top representatives of the BTT academy in the sport’s international circuit. A well-accomplished competitor, Vieira is also known for his unique style of grappling which earned him strong praise by media outlets such as the BJJ Scout and FloGrappling, particularly after his world famous loop choke over Tomoshige Sera at the UAEJJF Abu Dhabi Grand Slam Tour in Tokyo (2017).

Alexandre Vieira was born on April 12, 1990, in Rio de Janeiro – growing up in the world famous Zona Sul, Copacabana district – where he picked up an interest in martial arts.

The kicking art of capoeira was Alexandre Vieira’s first experience with a combat style, one he practiced regularly from the age of 5 to 15. Although he had many coaches along the way, none was more important than Master Rodrigo Escorpião, the man who taught Vieira not only technique but also the rich history of this martial art.

As a 7-year-old Vieira was approached by Carlson Gracie jiu-jitsu black belt Marcelo Saporito after a capoeira class. The well known BJJ instructor saw great talent in the young Alexandre and invited him to take part in his kids’ program under a scholarship, thus initiating Vieira in grappling.

Vieira’s time with Saporito was short-lived, as a yellow belt he moved to Flávio Nobre’s “Bushidô Academy”, an affiliate school of the illustrious Paulo Maurício Strauch. When Bushidô closed its doors a few years later Vieira moved to Strauch’s headquarters, Alexandre was a teenager then.

As a 15-year-old Alexandre Vieira added kickboxing to his weekly routine, combining it with BJJ. He competed in the ring under full contact rules and earned his black belt in this striking style a few years later. Although Vieira did not aspire to become a mixed martial artist when he started, given his grappling and striking experience MMA ended up crossing paths with the young Brazilian.

Alexandre’s cage fighting debut occurred in 2012 with the WOCS MMA promotion, having had no real preparation for the cage prior to the bout Vieira managed to make quick work of his opponent. On the corner of his challenger was veteran MMA fighter Alexandre Pimentel, who ended up befriending Vieira after the fight.

Alexandre Pimentel (AKA Pulga) saw a potential training partner in Alexandre and asked him to visit the Brazilian Top Team (BTT) HQ, to help him prepare for a match. After working with BTT and meeting team leader Murilo Bustamante it made sense for Vieira to prepare for a possible career in MMA there, and for that reason, he dropped Academia Strauch to join BTT – he was a brown belt at the time.

On December 17, 2014, Vieira earned his black belt from Murilo Bustamante. He would later reconsider his plans of becoming a professional cage fighter to dedicate himself full time to grappling. 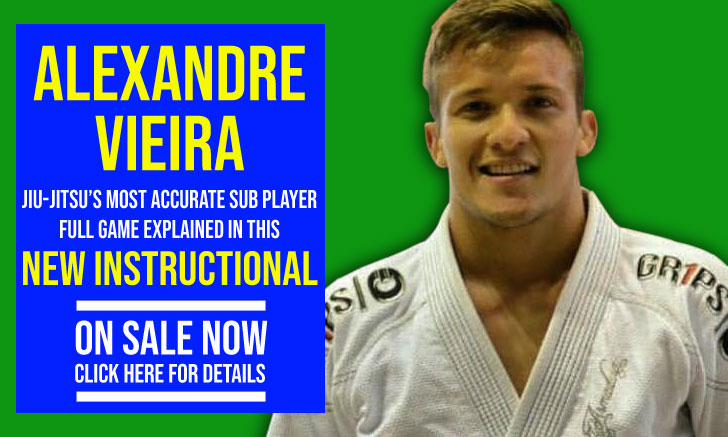