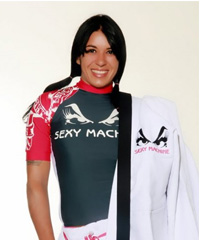 Ana Maria, known in the fighting World as India is a Brazilian Jiu Jitsu black belt from the Checkmat BJJ team. She is also a prolific Mixed Martial Artist (MMA) who has competed against some of the best in the sport.

Nickname: “India” in Portuguese means Indian Woman, the nickname began as Ana Maria started doing her hair in plaits when she trained and competed. She always liked to play guard, and styling her hair in a pony tail suit her guard work, as the hair would get in the way. The solution she found was plaits and because of her hair colour, people started calling her “India”.

Favourite Technique: Although she states that she loves Jiu Jitsu as a whole, she is famed for her crisp transitions from half Guard to the back mount.

Ana Maria was born in Barreiras in the State of Bahia, Brazil.

Ana was a late bloomer as she only picked up Brazilian Jiu Jitsu at the age of 21, having never trained in a martial art or combat sport before. Her first teacher was Alexandre Oliveira in Marilia, São Paulo. A person that nourished Ana Maria and forced her into believing she could go far in the sport.

She moved on from São Paulo to Salvador and the training didn’t stop. This time she started training with “Mestre Shark” from Brazilian Top Team (BTT), and was awarded her Blue and Purple Belt by Mr Shark.

Her Brazilian Jiu Jitsu Career really blossomed with BTT and travelling to the main academy in Rio de Janeiro was inevitable. Murilo Bustamante awarded her with the Brown Belt for her many achievements and for her 6 years under the BTT banner.

Ana Maria was part of the TV Documentary “No Limite” a program about women’s MMA in Brazil, during the making of the show, her Master Ricardo Vieira awarded her a very well deserved Black Belt.
Ana Maria is a true testament to the female warrior spirit, while she was pregnant of her daughter, she still managed to train until she was 5 months pregnant, and she was back to training one month after the labour. More impressive yet, she was fighting again 4 months after she gave birth.

In keeping with her warrior spirit, Ana Maria is always trying ways to improve her skill set in order to become a better overall fighter. She competes and trains in Boxing, Muay Thai, Wrestling (Greco-Roman) and Brazilian Jiu Jitsu, as well as Mixed Martial Arts. She has competed with the very best in female’s MMA such as Carina Damm and Vanessa Porto and Ediane Gomes. Being hard to get good fights in Women’s MMA, India fights anyone in her path, sometimes giving over 10kg to her opponents.

Ana Maria tries to get inspiration from the very best in the business, she always looks to mimic people like Ricardinho Vieira (her coach) whom she claims has the very best movement on the ground, Ary Farias for the way he always manages to show in competition what he is capable to do in training, Andre Galvao for his “straight to the point” way of fighting, Ronaldo Jacare for his speed and aggression, Tereré for his smarts, Roger Gracie for his precision, Leo Leite for his calm and the inevitables Roberto Cyborg and Alan “Finfou”.