Matheus Diniz is a Brazilian jiu-jitsu black belt under the illustrious Marcelo Garcia, being part of an incredible generation of athletes produced by the respected grappling coach, a generation that included competitors such as Dillon Danis, Dominika Obelenyte, Jonathan Satava, Marcus Tinoco, and Mansher Khera. Diniz made a name for himself in the sport, competing in the brown belt division, where he conquered important titles such as the World No-Gi and Pan American.

Nickname: Growing up Mathias had different nicknames, but “Gorilla” is the one that stood for longest. The name is used jokingly due to Diniz’s posture as he walks.

Matheus Diniz was born on the 8th of April, 1993 in Uberlandia, State of Minas Gerais – Brazil. At a very young age, Diniz moved further down south in the state, to the town of Formiga – the birthplace of the man who would award him his black belt later in life: Marcelo Garcia.

Capoeira was Matheus’ first contact with martial arts, a style he started at school when he was 10 years old. Growing up Diniz was somewhat of a troublemaker, this characteristic ended up getting him expelled from school, which put a stop to the capoeira classes. It was also this behavior that led him to jiu-jitsu in 2008.

At the age of 15, during high school, Matheus Diniz heard of a kid from a “rival” neighborhood who disliked him and wanted to fight. He knew the boy and knew that he trained jiu-jitsu at a local academy, so he decided to head down to this academy and meet the kid face to face, hoping to settle the score at his gym. The jiu-jitsu instructor there didn’t allow the fight to take place and told Matheus: “No one is fighting here, from now on you will train together and become friends”. This was Diniz’s first contact with his (soon to be) first coach, Rodrigo Ranieri.

After a few years training with Ranieri, and after receiving his blue belt, Matheus Diniz followed a similar path to that of Formiga’s most accomplished grappler (Marcelo Garcia), moving to Poços de Caldas, almost 300 kilometers away from his home, to lead the life of a jiu-jitsu athlete, living at Paulo Rezende‘s academy while training full time.

Coach Paulo Rezende awarded Diniz his purple and brown belts. Throughout this process, Matheus became acquainted with Garcia. Both were from the town of Formiga, and both started their full-time jiu-jitsu careers with Master Rezende. Marcelo saw great potential in Matheus and often paid for his travel expenses and tournament fees. When Matheus reached his brown belt, Marcelo invited him to come and continue his evolution at Garcia’s gym in New York.

At the MG academy, Diniz’ jiu-jitsu flourished, with his brown belt campaign bringing Matheus plenty of media attention, as well as a legion of fans. On April 2015 Matheus Diniz was awarded his black belt by Marcelo Garcia. 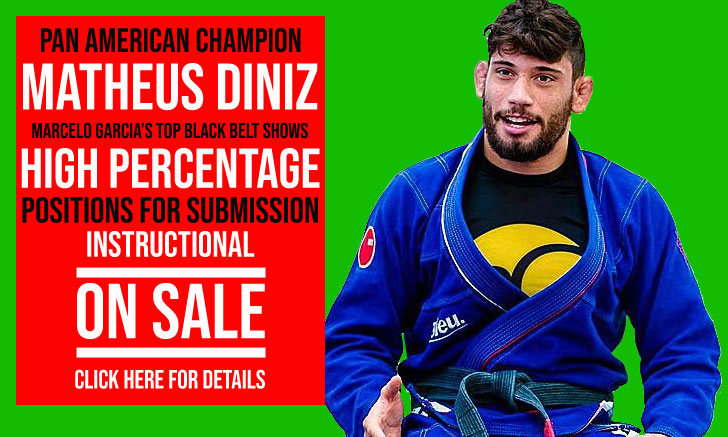