This article was written by Demétrio Vecchioli last year for the “Estadão” website in it’s Olimpílulas section, an award winning research based blog dedicated to olympic sports. Estadão is one of the largest news sources in Brazil. You can see the original piece here (in Portuguese). We present you here with a translation of the original article. 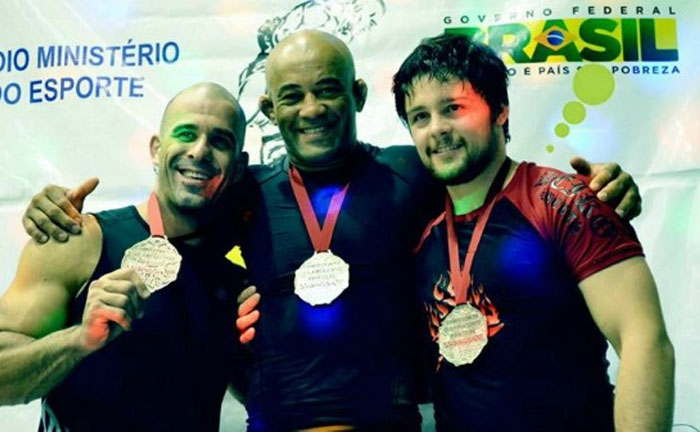 The photo above shows Paulo Pinto at the podium of the South American Submission Open, a tournament of a grappling style sport better known as “No Gi Jiu-Jitsu”. In the photo, he is surrounded by Jones Strong and Tarsis Humphreys, two medalists of the under 95kg weight category.

The Ministry of Sports, however, officiated by the Brazilian Confederation of Submission (CBLS), stated that the under 95kg South American champion of 2013 was Cristian Meneth Macambira, son of the president of the organization, Elisio Cardoso Macambira. Because of the supposed title, the government granted an Athlete Allowance of R$ 1,850.00 (monthly) to Cristian Macambira as indicated in the list published of the Official Gazette last November 15. (BJJ Heroes editor note: Brazil’s minimum wage was set at R$ 724,00 at the time).

The Ministry of Sports writes that, before granting an allowance to an athlete, it thoroughly checks any request by looking at “proof through the event’s documentation” and checking “the Internet, the names of the athletes and the competitions they participated in.” Even so, they did not find the results of the South American, that were available in specialized magazines and sites as well as the event’s page on Facebook.

The competition, held on the 18th of January last year, in Osasco (Sao Paulo), had a dedicated press office, which widely advertised it’s champions, including Paulo Pinto, who received the gold medal from Elisio Macambira himself, as shown by the photos of the podium.

Elisio Macambira is not your average chairman. He collects positions in federations and confederations, all with access to public funds. In Olympic sport, his most important post is that of vice president of the Brazilian Confederation of Associated Wrestling (CBLA), an organization linked to the Brazilian Olympic Committee (COB) and responsible for the sport of wrestling in the country. He is the second in command, just below the number 1 man, President Pedro Gama Filho (BJJ Heroes editor note: the son of the legendary Judo and BJJ figure, Pedro Gama Filho – senior).

The great advantage of Elisio Macambira, however, is the Brazilian Confederation of MMA (CBMMA), of which he is also the president. It took everyone in the media by surprise when, in 2012, Sports Minister Aldo showed up at the press conference announcement for the CBMMA launch, as if to give credibility to Elisio Macambira, who was an illustrious stranger in the fight world.

“I celebrate the creation of this confederation, and I know it’s in the hands of someone who knows the meaning of sports and values it’s importance in society and our youth,” said Aldo Rebelo, on the occasion of the launch of CBMMA. Elisio Macambira is affiliated to PCdoB the same national party as Minister Aldo, and was the first sports coordinator of the Socialist Youth, when it was founded by Aldo Rebelo, in 1984.

Despite the low representation and the fact that it organizes events focusing on athletes from a different sport (jiu-jitsu), the CLBS in 2011 managed to become apt to sign agreements with the Ministry of Sports for MMA. To obtain such approval, they submitted on August 30, 2012, five very technical letters, in a true alphabet soup, between many different entities.

The documents establishing the suitability of CBLS were all signed by entities associated with Elisio Macambira: CBLA (of which he is vice-president), CBMMA (where is the president), Olympic Greco-Roman Wrestling Federation of São Paulo (FOGRESP, headed by a son of Elisio Macambira), Federation of the State of São Paulo and Associated Wrestling Greco-Roman (the FLAESP has the same address as FOGRESP and is of no significance) and São Paulo Federation of Bujutsu (chaired by Rogério Vinicius Trinity, son vice President of CBMMA). The CNPJs of FOGRESP, the FLAESP and CBMMA were opened with three weeks apart in 2011, days before the first proposal sent to the ministry: agreement of US $ 60,000 to organize the Brazilian Championship of Submission Wrestling (No Gi BJJ).

The Ministry accepted the letters, which allowed the CBLS to receive R$356,000 from the government to organize the South American Submission Open 2013, on a day of torrential rain that brought down part of the Sesi gym ceiling, in Osasco. The value did not include the travel payment or hosting for foreign athletes, because the vast majority of competitors were students of jiu-jitsu academies in Sao Paulo – submission is often seen as a less noble version of jiu-jitsu, where strength and power can prevail due to the lack of kimono grips and leverage. Although a total of R$15,000 in prize money did attract important names for the event.

Upon receiving the documentation for the South American Open, the ministry agreed to concede athlete allowances to 11 medal winners (six of them male) of 55 categories. But due to some delays they were only paid a year later.

Although 66 athletes should technically have been compensated for their placements at the South American Open, only two fighters were awarded. One was Cristian Macambira, while the other is Rogério Vinicius Trinity, who is also president of the São Paulo Federation of Bujutsu. Son of John Roberto Trinity, sort of the right hand man of Elisio Macambira, Vinicius did not participate at the competition in Osasco, and certainly did not win the below 65kg category as the documentation sent to the Ministry of Sports showed.

After being questioned by the this reporter, Vinicius sent an e-mail to the Ministry of Sport requesting the cancellation of the grant, saying that was moving to Canada and would no longer be training. According to the ministry, the CBLS followed the same chain of thought and filed for the definitive cancellation of the two purses – the request did not state the reason for the cancellation. Paulo Pinto, the true South American champion of submission in 2013, claims that he was not informed of the possibility of receiving the allowance and has certainly interested in having the benefits.

CONTROVERSIES ALSO IN MMA – According to the ministry, the CBMMA, also chaired by Elisio Macambira, had the same attitude as CBLS and recently requested the cancellation of grants that would be paid to seven MMA athletes. Among those contemplated by the funds, according to the Official Gazette of November 15, was Jefferson Nemeth Macambira, the other son of Elisio, as South American champions of the sport in the category up to 93kg. The ministry also failed to inform the reason for the cancellation request.

At that time, two women – Taís Machado and Cynthia Lehnen Guth Nunes – had been contemplated by the MMA allowance also, the ministry said there was a “rectification” by the CBMMA hours previous to our enquires, we had questioned the reason for the benefits given to the two fighters who did not compete in the South American – the event was actually called “Dragon Fight”.

THE OTHER SIDE – In his first contact to our reporter, Elisio Macambira even said that his two sons trained jiu-jitsu and were purple belts. After he learned of the content of the complaints he said that would not grant more interviews and threatened with a lawyer not to provide the contact of sons. When sought again by telephone on Wednesday, he went on to yell a series of offenses (unprintable) to the blogger and ended the call abruptly.