The ADCC under 88Kg Division

The under 88kg division is home to two of the last three ADCC open weight tournament winners, historically being one of the hardest weight categories in the event. This year it is stronger than ever, having been reinforced by Braulio Estima. The 2009 absolute & 88kg division winner is back after two superfights at the event returning to the brackets of the competition.

In this article we will go through this important division of the ADCC, one of grappling’s toughest categories. This year’s competitors list, the champions of events past, and of course the numbers.

List of grapplers due to participate in the 2015 edition of the ADCC, in Sao Paulo – Brazil (29-30 August). With both the current champion Romulo Barral and the 2009 champ Braulio Estima on the list, will the two historic Gracie Barra  teammates collide?

1. Romulo Barral (2013 winner)
One of the best medium heavyweights in the history of jiu jitsu, the 4x world jiu jitsu champion and current ADCC champion is regarded by many as the favorite to win the tournament. Barral skipped the IBJJF World Championship this year to focus on his nogi, and has been training wrestling extensively at the Churchboyz Wrestling, with coach Jacob Harman, an important facet of the nogi game.

2. Rafael Lovato Jr. (invited)
The man with most submission finishes in the 88kg division is back once again to prove why he is one of the best grapplers ever produced in the United States. The former world champion (gi and no gi) is fully recovered from the injury that kept him away from the Pan Ams and the Mundial, having competed at the Curitiba Open earlier this year, where he proved why he is seen as one of the best finishers in the game with 7 submissions.

3. Neiman Gracie (invited)  (Rio trials winner)
With the world famous “Preguica” moving up a weight class in order to avoid one of his mentors (Romulo Barral) in the 1st round, Neiman Gracie has stepped up and took the vacancy. Neiman has jiu jitsu royal blood running through his veigns, being the son Master Marcio Stambowsky and Carla Gracie. He is also an accomplished black belt and cage competitor, with a perfect MMA record.

4. Keenan Cornelius (pending invitation)
The People’s Champ (unlike what Tito Ortiz might think) is Keenan, who carries with him the support of 1000’s of BJJ fans. One of the most talented grapplers of his generation, Cornelius went toe to toe with 2013’s champion Barral in the semi final at the last event, losing by a minimal point difference and earning himself a 3rd place. Will the US prodigy do better this year?

5. Pablo Popovitch  (invited)
The highly anticipated return of Braulio Estima to the mats will no longer take place at the ADCC. Instead, the former champion has been replaced with another former ADCC champ in Pablo Popovitch. Pablo is a formidable strategist with a mean double leg takedown. He hasn’t been seen in a competitive environment for a while, but has more than enough experience to make this a worth while trip to the motherland.

6. Claudio Calasans (Sao Paulo Trials winner)
The current middleweight IBJJF world champion, Calasans Junior will be one of the smallest athletes on the division, but what Calasans lacks in size, he makes up for in technique and tactical awareness.

7. Mike Perez (North American Trials winner)
One of the rising stars of the Atos jiu jitsu camp, Perez has a tough closed guard and a bright future ahead. Although Mike’s talent is unquestionable, he is still a purple belt making him one of the least experienced competitors on the roster.

8. Matt Arroyo (North American Trials winner)
A well known figure in the USA grappling circuit, the former The Ultimate Fighter 6 season contender is still going strong in the no gi scene and is looking to test himself once again against the very best in grappling this year.

9. Ricardo Mesquita  (invited)
It seems as though the half guard wizard, Lucas “Loucura” Leite is no longer taking part in the ADCC. He has been replaced by Ricardo Mesquita of Alliance Sao Paulo. Although Mesquita is not a big name in the sport, he brings power and athleticism as well as the Alliance quality stamp.

10. Craig Jones (Asia & Oceania Trials Winner)
Craig Jones is an Australian athlete who trains at ISOHEALTH in Adelaide (South Australia) under Matt Jones. Although he is still a purple belt, Craig won the ADCC trials in South Korea, an incredible deed for a young athlete with a bright future ahead of him.

11. Zbigniew Tyszka (European Trials winner)
Another bright prospect from Poland, a nation that is quickly taking over the European grappling circuit, Zbigniew “Zybi” Tyszka is a very technical no gi jiu jitsu stylish with a strong guillotine and a deadly heel hook.

12. Jesse Urholin (2nd European Trials winner)
Jesse Urholin is a brown belt from Finland who’s medalled at both the World Championship and the European Open. Not much is known of Urholin’s game which may play to his strengths in the initial rounds of the tournament.

14. Ezra Lenon (invited)
Ezra Lenon is a well known figure in the American jiu jitsu scene, especially without the gi. Lenon reached has medalled in the lower belts, having earned his black belt in less than 5 years. He has dedicated the past few years of his life to coaching and competing in the sport.

15. Yuri Simoes (invited)
Yuri Simoes is one of the top grapplers in the world and the current no gi open weight world champion. This will be Yuri’s first attempt at ADCC gold.

16. Rustam Chsiev (invited)
Well known in the American grappling circuit, Rustam Chsiev is a strong wrestler with a wealth of experience in no gi tournaments. 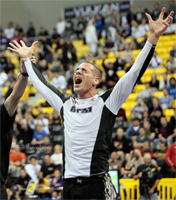 This division has had some of the most exciting grapplers competing in it, and the numbers show just that, a division so evenly matched that submissions are harder to find. With 121 matches recorded we have seen “only” 41 submissions. This equates to a 33.88% finish rate, the lowest among all the divisions in the event.

Another testament to this division’s toughness is that no one has ever had a successful submission run in this category (winning the division by submitting all its opponents). But where many struggled to finish, Rafael Lovato Jr seems to have found the path of the submission, being the man with the most taps in the history of the tournament (6) at 88kg.

With 14 wins at 88kg (2 by submission), the legendary Saulo Ribeiro has gathered the most amount of wins in this category, with only two losses.

This division also stands out as the first to crown European (1999) and a Japanese (2001) champions in Kareem Barchlov and Sanae Kikuta, respectively.