The biggest and most prestigious tournament in jiu jitsu’s sporting calendar has just passed us, the famous IBJJF World Jiu Jitsu Championship (full results here). This tournament is the main reason why many of our sport’s top competitors spend most of the year training, enduring gruelling jiu jitsu sessions in an attempt to reach the mats of Long Beach’s Walter Pyramid in peak condition.

With each year that passes, new positions are invented (or reinvented), new games added and new trends set. Last year in our Crunching Numbers piece for the 2015 World Championship, we assessed a few of the key points in the famous tournament, particularly regarding submissions. This year, we went above last year’s analysis, going through other important parts of the jiu jitsu game, covering sweeps, takedowns, back attacks and of course, the submissions.

So without further ado, here are the results:

2016 brought us more matches in the men’s adult black belt division, nearing 200 contests. A sizeable increase, considering the 145 recorded last year or the 162 of 2014. The female division this year brought us 56 matches, also a nice increase from the 46 that took place last year.

From those accounted men’s matches, we saw a decrease in the percentage of overall submissions comparing to last year’s results, or even 2014’s submission ratio. This trend came in line with the drop in the finish rate reported at the time of the 2016 IBJJF Pan Ams.

Below is a more detailed pie chart of the methods applied to dictate the victors at this year’s black belt adult male matches in the “Mundial”: 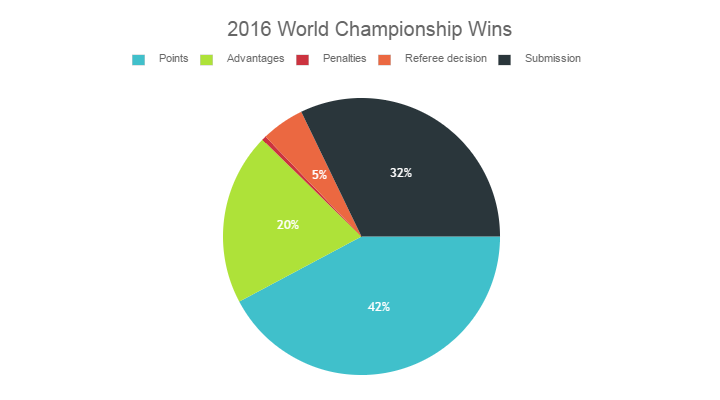 TOP SUBMISSIONS AT THE 2016 WORLDS

If you’ve been reading our stats-articles for the past couple of years, this may not come as a shock to you, but the choke from back control was the most popular finish at the highest level of the sport this year. Also unsurprisingly, the choke was followed by the armbar, another important tool in jiu jitsu’s submission game that has consistently ranked at #2 in our tap count of the world’s top tournaments.

Not many changes in the distribution of the submissions, though we did see the toe hold dying down, maybe thanks to the rubber feet of competitors such as Caio Terra and Joao Miyao. Another interesting factor this year was the rise of the straight ankle lock, the deadly “botinha” that was the 3rd most utilized finishing move of the World Championship.

Full details of each submission used below: 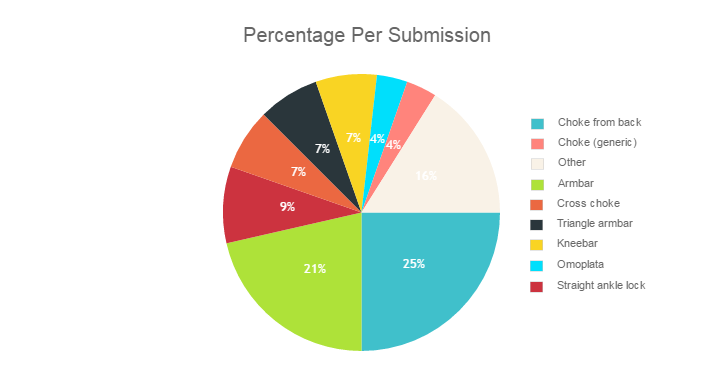 We also went through each weight class individually, trying to discern which category pushes harder for the finish. The results were even for the most part, with the medium heavyweights showing the highest submission rate at 43%. The lowest numbers were produced by the heavy (10%) and super heavyweights (16%) both of which were well below the black belt division’s average.

The guard is at the heart of the jiu jitsu game. Often referred to as Brazilian jiu jitsu’s greatest contribution to martial arts, this dangerous position is utilized defensively and offensively, delivering submissions and game changing sweeps. It is the latter that we present in this portion of the 2016 World Jiu Jitsu Championship analysis.

The numbers don’t lie with regards to the importance of a sweep in a match, particularly at the highest level where every point may count as a death sentence in an athlete’s progression to the next round. In this exercise, we sought out which guards have contributed the most to adding points on the scoreboard.

It is important to outline the manner in which the selection was made. Once all sweeps were accounted for, and understanding that at the highest level, guard structures may change in the blink of an eye, we chose to pinpoint the guard being played when the sweeping sequence initiated.

This year we certainly witnessed a rise in the use of the lapel guard, with nearly every lower weight match seeing this modern use of the gi, but did it translate in numbers? Though it certainly served it’s function of slowing down the more frenetic guard passers, it fell somewhat short of placing points on the board.

On the other hand, the much debated 50/50 guard was also utilized to exhaustion, being deployed with the most success. Much of these high numbers in the 50/50 are owed to the nature of this guard, where athletes end up being drawn into perpetual sweeps with very limiting ramifications, adding numbers on the board, but very little interest to the general public.

Another interesting aspect of this research was finding old school positions such as the half guard and the closed guard ranking at #2 and #3. Often disregarded by modern guard players, these two pillars of the jiu jitsu game are still causing waves in the sport, more so than the majority of modern day applications of the bottom game. On the other hand, the Single Leg X has completely taken over the contemporary guards, overthrowing its forefather, the X Guard, the famous DLR and the Spider Guard. 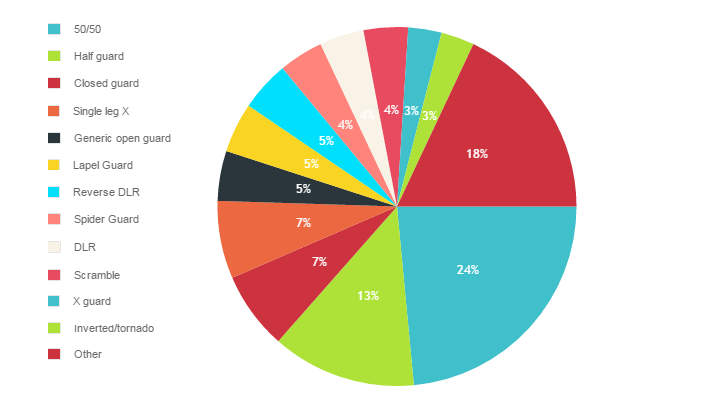 IS THE TAKEDOWN DEAD IN BJJ?

Another well debated subject in modern day jiu jitsu is the increasing number of double guard pulling, and the lack of a takedown game by many of our sport’s new generation of competitors.

The numbers are pretty clear. The times of Leozinho, Shaolin, Royler Gracie and company are well behind us with double guard pulls overthrowing the takedowns by 33 to 32. The numbers are even more staggering once we analyse all of those takedowns…

Many of those 32 accounted takedowns, were not accomplished in gruelling stand-up battles, with at least 13 of those being taken by well timed double legs or ankle picks as the opponents tried to pull guard at the start of the match.

When there were battles for that top position, the prefered takedown was the sweep single leg, often coming from collar drags. More details on the varied throws/TKDs used at this year’s IBJJF Worlds below:

The 4 points for a secured back control were awarded 30 times at the World Championships this year. With new positions such as the berimbolo, kiss of the dragon and several lapel guard maneuvers being created almost every year to attack the back, we were curious to find which has more success at the highest level.

The numbers show that “turteling” while trying to defend the 3 points for the guard pass is overwhelmingly behind the majority of back takes. In fact, it was interesting to observe that few back takes came from a bottom position, something I certainly expected to see more of.

And so here we have it, the black belt division dissected. We hope you found the information useful and wish it can in some way help tweak your jiu jitsu.