The ‘Grau de Poderosidade’ (in Portuguese) was a scale created as a joke by the late Great Master Carlson Gracie to define a few of his student’s characters. The term (that could be translated as: Scale of Prowess / Slickness / Arrogance or ‘Powerfulness’) was very quickly adopted by many people within the Brazilian Jiu Jitsu community as a light hearted way to define those who think they are somewhat special among the group, much like a level of arrogance.

Many believe that the ‘Poderoso’ adjective had a bad connotation, this is not correct, according to Carlson Gracie Junior (son of the Great Master Carlson). There were several levels in his funny chart, and Poderoso would be someone with belief in himself, something valued by the Jiu Jitsu Master. If you had no belief in yourself, you had no business in Jiu Jitsu, however, ‘Poderosíssimo’ would be someone that would extrapolate the boundaries of reason and would be (for lack of a better word) full of himself.

If you have any of these “virtues”, you may consider yourself a ‘Poderoso’:

1) Nasty character, you talk too much, you’re a bickerer, a wrong’un

2) You like to cause fights, a liar, fake, cunning (artful), presumptuous, lewd, pervert, creep (toady), nosy.

5) If you ‘juice’ (take steroids) to get stronger.

6) Kleptomaniac, sick pervert that doesn’t respect other people’s rights, if you always trust everyone (bad judge of character), if you don’t have minimum level of good manners, if you are a pain in the behind (annoying person), envious person who likes to see others fall, etc.

0% – Should Be Locked Up (Institutionalized): A moron (Master Carlson used a different adjective here that some might find too offensive to publish, different times and different culture.)

10% – Clueless/Mindless: One step away from being a moron.

20% – Very Methodical Person: Wants everything done neatly all the time.

50% – Ultra Powerful (Poderosíssimo), Almost a Lunatic: You can’t live in a community. 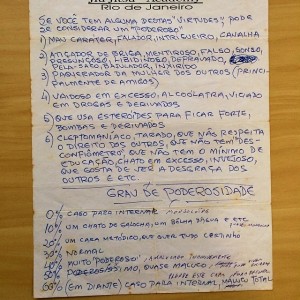