Travis Stevens is an American grappler who holds the rank of black belt in both judo as well as jiu-jitsu and worked extensively with two legendary coaches of each individual sport, namely Jimmy Pedro (judo) and John Danaher (jiu-jitsu). Stevens competed in the 2008, 2012, and 2016 Summer Olympics as a judoka in the men’s 81-kilogram (178.5 lbs) division. Stevens was also the third American male judoka to conquer a silver medal in the Olympics, a podium he earned on August 9, 2016.

Travis Stevens was born on February 28, 1986, in Bellevue, Washington, United States of America, though he moved to Tacoma, WA at a very young age, after his parents separated, where he lived with his sister, mother, and grandparents.

As Travis approached his 7th birthday, he joined a local youth center, where he started practicing judo. The training location was quite humble according to Stevens himself, who stated, during an interview with BJJ Heroes from December 2019: “The gym was a simple just one basketball court and nothing else. We used to have to show up 30 mins early to set up all the mats in order to half practice.” It was also while training at this humble facility that 7-year-old Travis started his competitive career. His success on the mats would earn Stevens his black belt when he was 17 to 18 years old.

It would take nearly 13 years of training before Travis met the judo coach with which his career would be associated, Mr. Jimmy Pedro, with whom Stevens started working consistently in 2006 “I believe I started to work with Jimmy as a member of the under 23 team back in 2006. He used to coach me when I was traveling with the team. At the time between 2004-2008 there wasn’t really a National Squad” said the Olympian, who, after 2009, joined the US team’s newly opened performance-based sponsorship (stipend) program, making the squad thanks to his Pan American Games gold medal of 2007.

In February 2012, while preparing for that year’s Olympic Games, Stevens suffered a lisfranc fracture to his right foot. Unable to train in judo for a while, Travis decided to join a jiu-jitsu school where he could grapple more consistently from his back (guard playing), then joining the Renzo Gracie Academy (RGA) in New York on April that year, where he became a student of John Danaher, the gym’s head instructor.

By the time Travis started training with Danaher, he was not unaware of jiu-jitsu’s grappling concepts. In fact, he had participated in Dave Camarillo‘s BJJ classes at the American Kickboxing Academy (AKA), in San Jose, CA from 2005 to 2006, using those classes as an extra workout. This previous interaction, allied with his extensive judo background at an elite level led instructor John Danaher to grade Stevens to the rank of BJJ purple belt after only a few classes at RGA.

After training for a couple of months as a purple belt Danaher awarded the brown belt to Travis. During this period Stevens went on to compete and represent both BJJ and Judo at two important grappling competitions, the World Expo and Copa Podio in Brazil. His exciting performances and fast grasp of jiu-jitsu’s principles led instructor John to promote the Washington native to black belt, a promotion ceremony that took place in November 2013.

While developing into one of the biggest judo names in the United States, Travis opened a judo + jiu-jitsu academy in Wakefield, MA (19 New Salem Street, MA 01880), where Stevens taught his own brand of jiu-jitsu, using a style more aligned with the ADCC (Abu Dhabi Combat Club) tournament rules rather than the more standardized IBJJF (International Brazilian Jiu-Jitsu Federation) guidelines.

Note that the record here shown relates solely to Stevens’ matches as a BJJ black belt, competing under BJJ rules. These were all professional matches against the upper echelon of this sport and mostly a few weight classes above Travis’ natural weight. 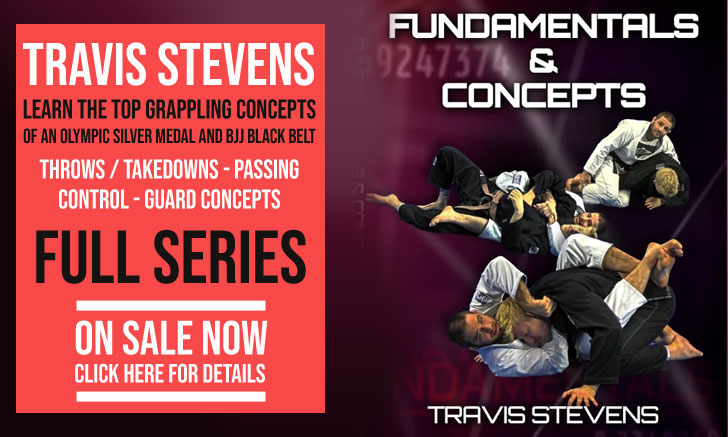