Zach Maslany is a jiu-jitsu black belt under Eddie Bravo who co-founded the 1oth Planet team affiliate in Bethlehem-Pennsylvania (10th Planet Bethlehem) with fellow 10P black belt JM Holland. Although an experienced competitor in grappling, mixed martial arts (MMA), karate, and kickboxing, Maslany is mostly known for is his impressive work as an instructor, where he developed internationally respected athletes such as Jon Blank, Grace Gundrum, and Zack Edwards to name a few. Maslany is also the co-founder of Finishers Only, a popular submission-only style grappling tournament. 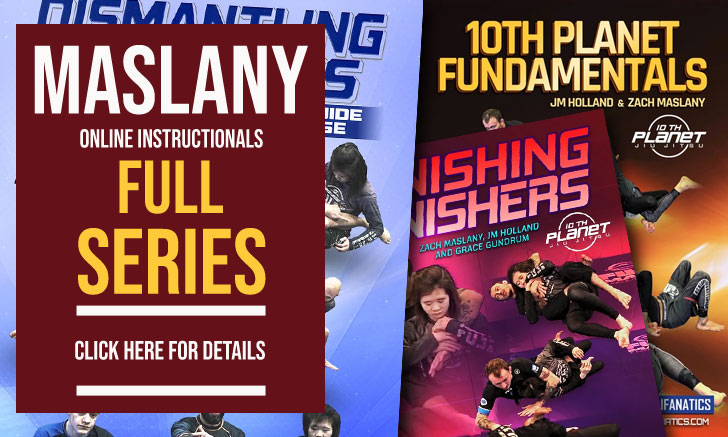 Zachary Maslany was born on June 8, 1983, in Pennsylvania, United States, growing up in the local cities of Northampton and Bethlehem.

A big advocate of sports, Zach’s father enrolled his sons in karate lessons as soon as they were old enough to train. Maslany trained for many years in Japan’s striking-based combat style, earning a black belt under Master Tiger Schulmann.

Karate opened the doors of other martial arts styles to Zach, who went on to compete in kickboxing, ending that short-lived career with an unbeaten record of 4-0-1. From there, Maslany moved to boxing, competing in the nationally famous, Golden Gloves event.

Maslany started a career in mixed martial arts by chance, after one of his gym teammates dropped out of a cage fight due to injury. Zach decided to step up to the occasion and replace him at the event. The year was 2002 and the show was: Reality Fighting 2. The debut was won by Maslany who continued to compete in MMA, conquering a title in the USMMA promotion at a later stage.

A submission loss via triangle choke at Reality Fighting 3 (February 2003) turned Maslany’s attention to grappling and how important it was to his aspirations of becoming a complete fighter. Although he was familiar with jiu-jitsu, this was not his main training focus at the time and required plenty of work. Not one for half measures, Zach decided to dive into the jiu-jitsu lifestyle by joining coach Eddie Bravo‘s 10th Planet Academy in California.

Spending his time between California and Pennsylvania (where he trained with Robert Villafane), led Zach to distance himself from the MMA. He eventually opened his own gym, a 1oth Planet team affiliate, in Bethlehem, alongside his good friend and training partner JM Holland. The two quickly established themselves among the top no-gi coaches in the USA.

Being embedded in grappling culture, particularly in the EBI ruleset designed by his instructor, it didn’t take long for Maslany and Holland to identify the lack of opportunity for sub-only athletes in the Tri-State area to compete in this setting. In trying to rectify that, Zach and JM started the Finishers Only jiu-jitsu event, in November 2015. Although aimed to discover East Coast talent, the event quickly outgrew the local scene.