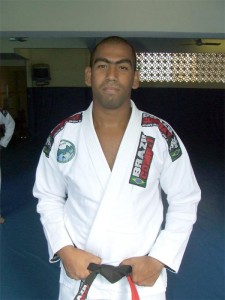 Thiago Rogerio dos Santos is a Brazilian Jiu Jitsu black belt under André “Negão” Terencio and one of the main instructors at the Brasil 021 team. Though Thiago is an instructor at Brasil 021, he also competes having achieved some important titles such as the Niteroi state championship and a bronze medal at the New York Open.

Nickname: “Boquinha” (Small Mouth) this was given to Thiago because his older brother was called “Bocão” (Big Mouth). Thiago is also called “Sorriso” (Smile) because he is always laughing.

Thiago had trained many other sports growing up, including Football (Soccer) and Tae Kwon Do, he enjoyed the sporting life so much that he decided to study Physical Education at the university.

In Brazilian Jiu Jitsu, Thiago Rogerio only trained under the Brasil 021 banner (something that does not occur often in current times). He was awarded all belts by master Andre Terencio, including his black belt which he received on April 2010.