Fabricio Andrey Batista Junior, commonly known as Fabricio Andrey or by his nickname “Hokage”, is a jiu-jitsu pro athlete from Brazil and a black belt under Melqui Galvão, who also worked extensively with coaches Michael Langhi, Fábio Gurgel, and Isaque Bahiense. Fabricio first made a name for himself in the sport while competing in the colored belt division for the Alliance Team, where he earned some of the most important tournaments on the International Brazilian Jiu-Jitsu Federation (IBJJF) circuit, including World, Pan, European and Brazilian titles, having also represented Fight Sports and Dream Art.

Nickname: Referenced among friends as Hokage, a name that Fabricio often wears in his gi, is a homage to his favorite cartoon show/Manga series, Naruto.

Fabricio Andrey was born on March 5, 2000, in Manaus, the capital city of the Brazilian state of Amazonas.

Growing up in a household with a strong capoeira background – Andrey’s father was an instructor in the Brazilian kicking martial art style, it didn’t come as a surprise when Fabricio started learning the family trade, an activity he began as a child.

It was at the age of 13, by the end of 2013, that Fabricio added jiu-jitsu to his extracurricular hobbies, at a social project near his home named Projeto Nandinho, with coach Melqui Galvão, one of the most well-known and successful instructors in the Manaus area and, arguably, the world.

As a green belt, Andrey was already training as a professional athlete, with all his focus pointed to jiu-jitsu, and by the time he was a blue belt, he decided to try and compete at the IBJJF World Championships in California. To improve his chances of earning a USA visa Fabricio moved to São Paulo. There he had the logistic support of the Alliance Matriz Academy and the subsidiary Dream Art Project (DAP) – two workgroups affiliated with coach Melqui Galvão. After that first attempt, Andrey ended up staying in São Paulo, training mostly with DAP.

Although still linked with Melqui Galvão, and visiting his instructor regularly throughout his colored belt progression, Fabricio Andrey earned his promotions to purple and brown belts from Michael Langhi and Fábio Gurgel. For his black belt, however, Andrey opted to travel to Manaus and pay respect to his longtime instructor, Melqui Galvão, who promoted the young star in August 2020.

After earning two sequential world titles in 2018 (blue) and 2019 (purple), Fabricio Andrey was set to conquer the “Mundial” for the third time in 2020, as a brown belt. The year started off well for Andrey who dominated his division at the European Open in Lisbon, Portugal, in January. Andrey’s world title aspirations were, however, taken away once the covid19 pandemic hit the Western World in March of that year. The virus spread and led the sport’s amateur circuit to shut down for most of the year, canceling many of jiu-jitsu’s most important events. 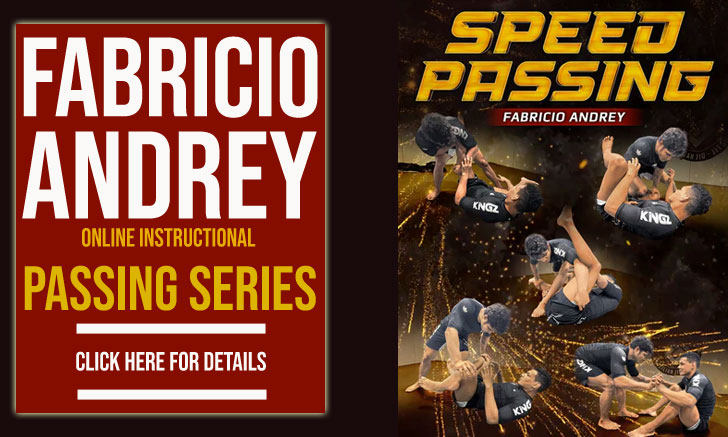