Felipe Pena, also known as Felipe “Preguiça” is a Brazilian Jiu-Jitsu competitor and representative of the Gracie Barra – Belo Horizonte academy, as well as a black belt under Marcelo Azevedo. Pena is widely regarded as one of the top jiu-jitsu competitors of his generation, a status cemented through his many wins in events such as the ADCC, Copa Pódio’s HW GP, Brazilian Nationals (Brasileiro), and Abu Dhabi Pro championship. Preguiça is also the younger brother of another well-known grappler: Augusto “Tio Chico” Carsalade.

Nickname: “Preguiça” means lazy, or sloth. The nickname was given by Vinicius “Draculino” when Felipe Pena started practicing jiu-jitsu as a teenager, the reason being he was very lazy and slow from being overweight. The nickname ended up motivating Felipe to train harder.

At the age of 14 – influenced by his older brother Augusto Vieira Carsalade, Preguiça started training jiu-jitsu at the Gracie Barra Belo Horizonte’s kids program. Once Pena reached the blue belt level his tuition was taken over by both Marcelo “Uirapuru” and Sérgio Benini, leaders of the adult team.

Training in a very competition-focused academy such as Gracie Barra BH, Felipe Preguiça was also driven to the many tournament outlets available throughout the year. His repeated success on the mats led to Pena’s decision of following a career as a professional grappler.

Through his own hard work, dedication, and natural talent, Felipe quickly started making his mark in the sport by winning important tournaments at purple belt and brown belt. While piling up gold medals, Felipe trained not only at the Belo Horizonte headquarters but also traveled to the United States on many occasions to work with another BJJ legend in Romulo Barral, at Gracie Barra Northridge (California).

Pena’s repeated success led to his black belt by the end of 2012 from the hands of head GB-BH instructor Vinícius “Draculino” and Marcelo Azevedo (Uirapuru).

In May 2015 Felipe Pena was suspended by the IBJJF (international jiu-jitsu federation) for a failed banned substances test during the World Championship. After the 1 year suspension, Preguiça returned stronger than ever, conquering tournaments such as the European Open, the Abu Dhabi Pro, Marianas Open, UAEJJF Tokyo, and Rio de Janeiro Grand Slams to name a few.

These aforementioned victories while competing in jiu-jitsu’s professional circuit throughout 2016, earned him the #1 spot as BJJ’s top earner. This, according to an assessment published by BJJ Heroes in December of that year. 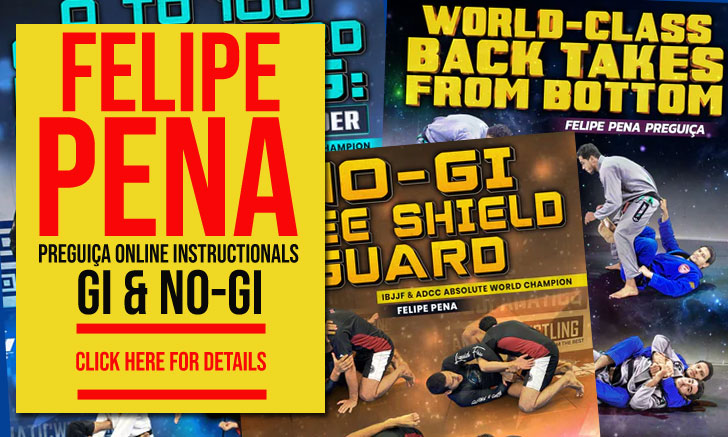