Gustavo Batista, often referenced as ‘Braguinha’ is a Brazilian jiu-jitsu black belt under Leandro Lo and a former representative of the New School Brotherhood academy in the sport’s international tour, later changing to Atos JJ (2018). Batista made a name for himself in the lower belt divisions of this martial art’s competitive circuit, particularly as a brown belt – a time when Braguinha conquered the #1 Ranking of the United Arab Emirates Jiu-Jitsu Federation (UAEJJF) beating several outstanding black belts in the process, including Alexandre Ribeiro, José Júnior, John Combs and Kevin Mahecha.

Gustavo Batista was born on March 11, 1996, in Florianópolis, the capital of southern Brazil’s Santa Catarina state, growing up in Palhoça – also in SC.

Like most Brazilian children, Batista’s introduction to competitive sports was made through football (soccer), an activity he carried on practicing up until 2012. Gustavo gained interest in jiu-jitsu through his older brother who already practiced this martial art, and by the time Braguinha was 15 he too decided to join the local BJJ academy.

Felipe Teixeira was Gustavo’s first instructor and the man who graded Braguinha with his blue belt, an important step in Batista’s life as it was then that he decided to become a professional BJJ athlete. Galvanized by good competitive results Batista decided to move to São Paulo and enroll at the world-famous PSLPB (Projeto Social Lutando Pelo Bem) gym/project led by Cícero Costha.

At PSLPB Braguinha met and befriended Leandro Lo, who was a big reference (and somewhat of an unmentioned captain) for the workgroup. Once Lo split from Costha’s affiliation in September 2015, Batista followed him and joined the newly formed NS Brotherhood academy.

In January 2018, after some turmoil in the Ns Brotherhood academy, Gustavo Batista chose to switch camps, following his then-girlfriend Luiza Monteiro to Atos Jiu-Jitsu in California. 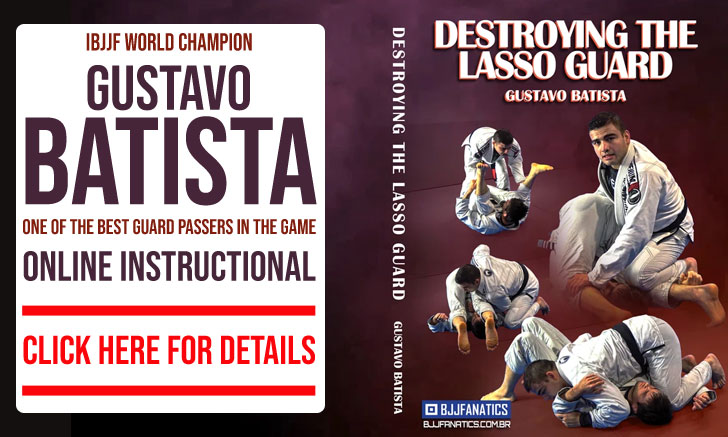