Another year, another epic jiu-jitsu season. This year, 2022, marked – once and for all – our sport’s return to normalcy since the 2019 pandemic, with all of the main tournaments of the IBJJF and the ADCC finally back in full force in a way we hadn’t seen for the past 2.5 years. Given how much fun we’ve had watching our sport grow over the past 12 months, it is with great pleasure that we return to our Top Finishers In Jiu-Jitsu rankings, a feature we’ve done at the end of every season for the past 8 years.

As in previous editions of our ranking, the rules of this little exercise are simple: Every male black belt athlete who achieved victory in a minimum of 15 grappling matches at a professional/high-level event was counted as did all ADCC and IBJJF World Champions. What we mean by a professional-level tournament is any tournament/GP/super-fight promotion with talent depth similar to an IBJJF adult black belt style tournament.

For our female rankings, given that there were less than ⅓ of pro-level matches in this division than there were in the male during 2022, we have opted to add every medalist in the ADCC and IBJJF World and Pan tournaments (gi & no-gi) that won 10 or more clashes this year.

Please note that, for the purpose of this exercise, EBI overtime style submissions are not accounted as subs as these are obtained outside the flow of the match, starting from pre-set advantageous positions. Also, it is the athletes’ submission ratio is taken into account for this ranking, not the number of submissions, however, in the case of a percentual tie, the athlete with the most submissions will be placed first.

If you want to check previous years of the Top Finishers ranking, please check below: 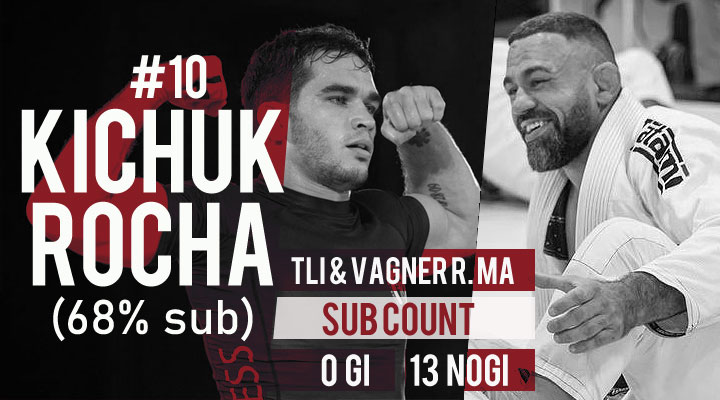 An unusual turn of events had Kieran Kichuck and Vagner Rocha tied for the same number of matches and the same number of submissions this year. Rocha had one of the best competitive years of his long-lasting career, this time in a weight class above what he was most known for in his younger days. The challenge for the 88-kg division was incredibly successful as the veteran earned another ADCC medal with a heroic performance.

The Canadian, Kieran, focussed a lot of his career this year on EBI rules tournaments, but still made two appearances in the IBJJF Pan and World No-Gi tournaments, taking a silver medal in the Pans. Kichuk submitted a few well-known names of the championship circuit such as Jonata Gomes, Damion Oranday, and Jordan Holy. 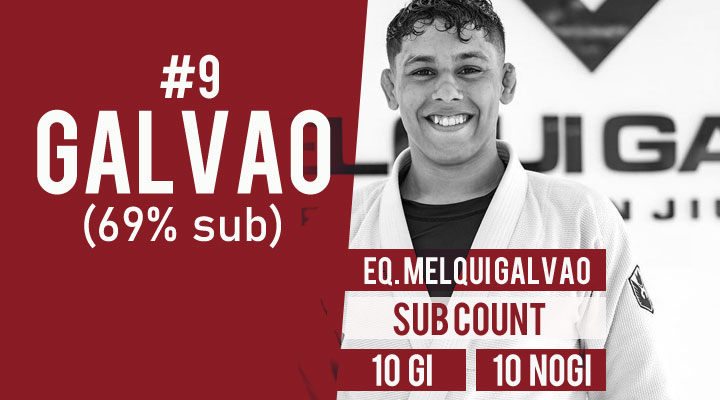 One of the most talked about athletes of the modern era is Micael Galvão and for good reason. This 19-year-old black belt is already one of the most complete competitors in the sport, challenging tournaments regularly and successfully in both gi and no-gi while playing a crowd-pleasing game with savvy takedowns, guard passing, and guard work. The complete package with a strong submission game to boot. An athlete we will be hearing a lot of for many years, no doubt. 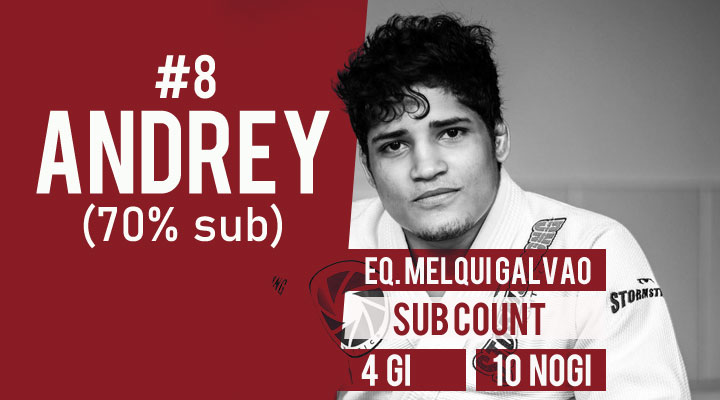 An incredible talent from coach Melqui Galvão, Andrey is a super versatile featherweight who can wrestle, pass-guards with fantastic athleticism and pace, and can play guard. He is traditionally known as a gi-type player but made somewhat of a switch to no-gi this year to compete at the ADCC and Polaris events, despite remaining fairly active in the gi as well.

Andrey was incredibly active this year with 29 matches but somewhat faded near the end of the season, going on a 7-5-3 record in his past 15 outings. 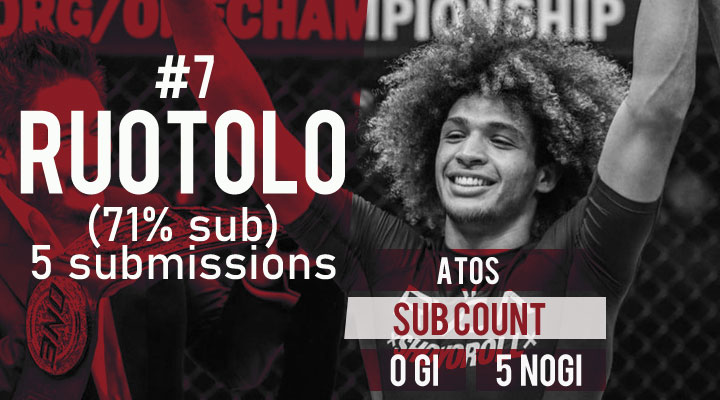 An athlete who is a fierce advocate for PED-free sport is Kade Ruotolo, the current 77-kg ADCC champion, who broke from the pack in 2022 as he became the youngest-ever athlete to win the promotion’s world title. He did this incredible feat by submitting everyone on his path, an accomplishment only executed by a handful of combat sports legends.

At just 19 years of age, Ruotolo has the grappling world at his feet. He is on an 18-match winning streak, he signed and is competing for one of the wealthiest combat sports organizations in the world (One FC), and there is no shortage of fun matches in the middleweight division for him in 2023.

You may notice that Kade Ruotolo ended the year with the same finish ratio of #5 ranked Gabriel Almeida, nevertheless, he is featured in the #7 position due to having fewer submissions overall than Almeida, as per ranking rules (above). 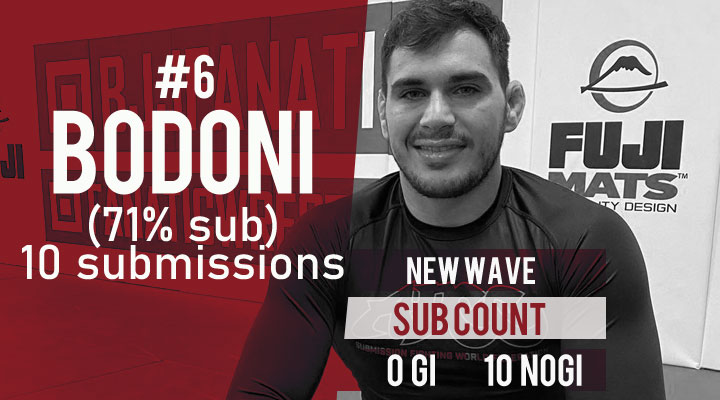 Although a top-tier athlete for quite some time with medals in the IBJJF No-Gi Pans in 2020 and 2021, many would regard 2022 as a breakthrough year for the Floridian, Bodoni. Much of this sentiment is down to his outstanding ADCC World Championship 88-kg run this year. A performance where he submitted 3 out of 4 opponents, including Lucas Hulk in the final, an athlete who had never before been submitted in this weight class under a no-gi ruleset.

Giancarlo ended the year with the same submission rate of #5 ranked Gabriel Almeida but is featured in the #6 position due to having fewer submissions overall than the Brazilian player, as per ranking rules (above). 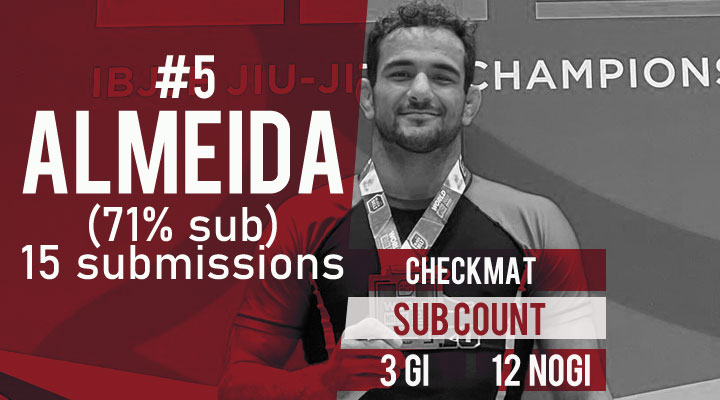 One of the most interesting athletes on the team Checkmat roster, Almeida was the author of many fun matches in the early stages of 2022. Sadly, for himself and jiu-jitsu fans, injuries pushed Gabriel out of a fair few big tournaments this year. Nevertheless, this young man still managed to medal in tournaments such as the ADCC Las Vegas, the IBJJF Jiu-JItsu Con, LA Open, and more, with wins over big names like Sergio Rios, Miha Perhavec, Marcelo Gomide, Diego Pato, to name a few. 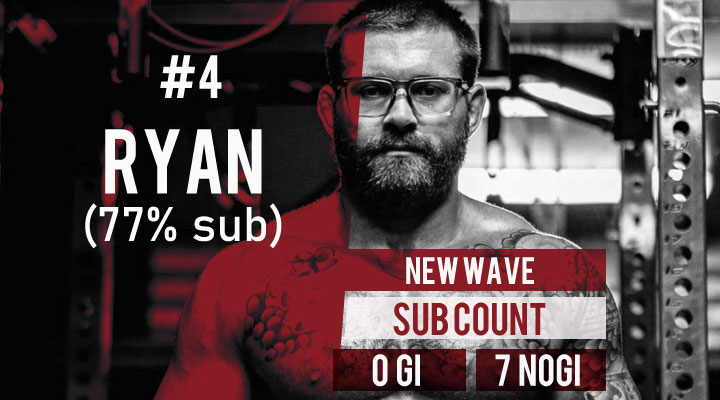 Ryan has been on a solid winning streak for quite some time, but it is hard to argue with 2022 being his best competitive year to date. The New Jersey native had the run of a lifetime at the ADCC, taking a gold medal in one of the strongest ultra-heavyweight divisions in the history of the event while also (unprecedently) winning the open-weight super fight. He skilfully avenged his loss to Felipe Pena and wasn’t scored a single point over the past 12 months. Oh, and nearly everyone he faced was a top-10, world-class competitor. Remarkable. 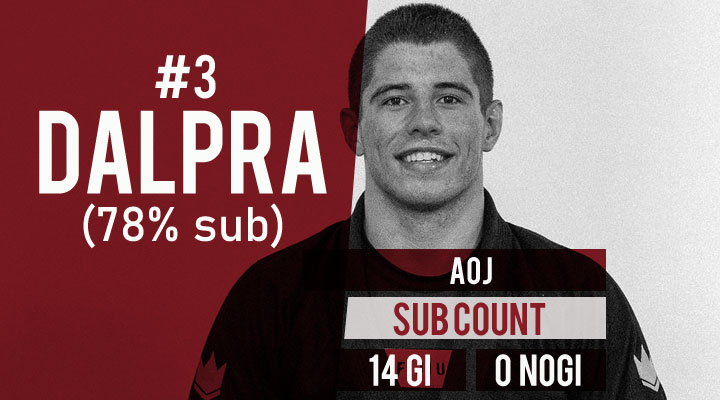 The most dominant middleweight in the world right now is AOJ’s Tainan Dalpra, a competitor who ruled the IBJJF World, European, and Pan American Championships (gi ruleset) this year with an iron fist, not suffering a single point in any of these top tier tournaments.

Going on his second year as a black belt, this is a repeat appearance for Dapra in these rankings (last year at #8), he who only has one loss in his career thus far coming via the narrowest of margins (a referee decision) back in June 2021. Tainan’s jiu-jitsu is as clean as his record, he is strategic without being boring, and always aims for submissions as his finish ratio can attest. 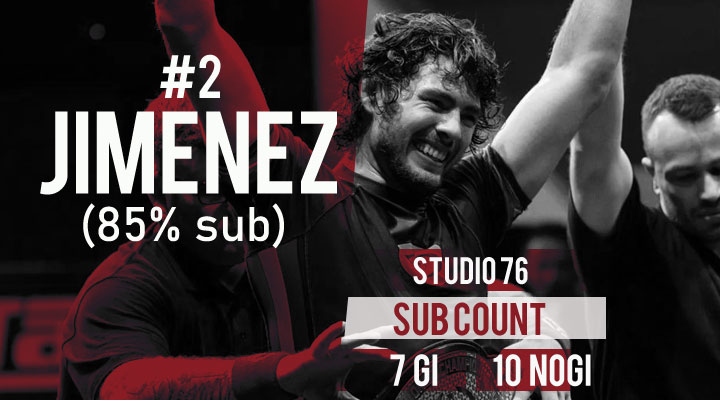 Well known for being one of the strongest standard bearers for a clean, doping-free sport, Ecuador’s Jimenez is also an athlete who prides himself on always bringing entertainment into his matches.

Among Roberto’s many epic wars this year we would advise checking his matches with Andy Varela (ADCC), Hunter Colvin (Polaris 22), and Lucas Protasio (IBJJF Rio Summer Open), to name a few. He had incredible runs, particularly at the Polaris Grand Prix and ADCC South American Trials, and we hope to see plenty more of this young man in 2023 as he embodies everything this sport needs. 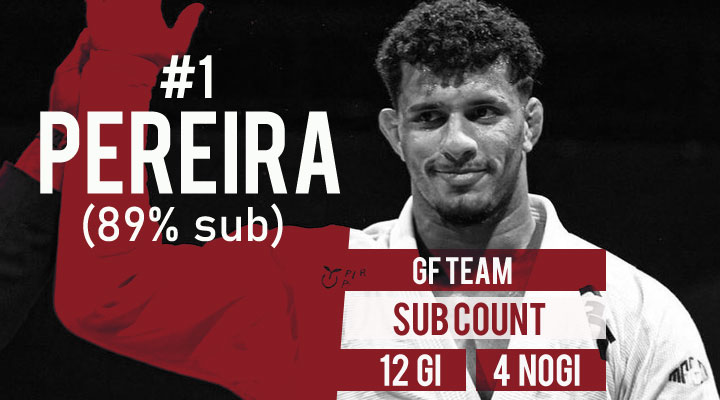 At the top of the list is, arguably, the most fun grappler to follow in the sport, “Berg” Pereira. A super-heavyweight who moves like a lightweight and has one of the most technical guards in jiu-jitsu.

Gutemberg is mostly a gi player but did venture into the ADCC’s Trials this year, in Brazil, which he won with relative ease while submitting every single one of his opponents. Sadly, unforeseen circumstances saw him out of the main tournament in September, but even though he missed the biggest show of the year, Pereira made up for it with 18 matches this season, 16 of which he finished while competing in some of the toughest events on the international circuit. One of the most impressive grappling campaigns we have seen in a while from the Brazilian athlete in 2022. 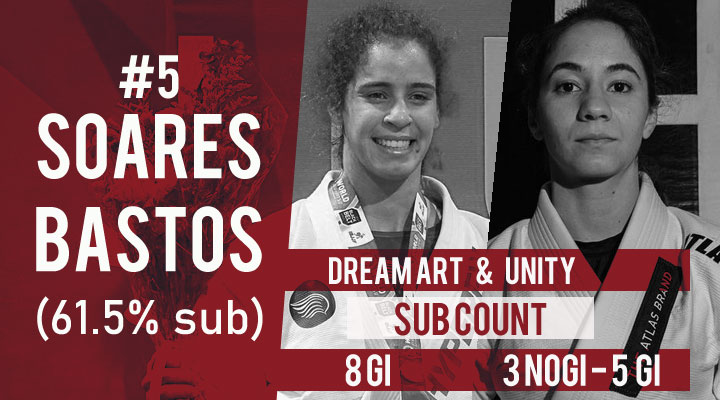 Despite their young age, one could consider both Yara and Mayssa as veterans of the sport at this point, given their list of accomplishments. In 2022, roosterweight Bastos had many incursions to the upper weight classes which somewhat diminished her wins-losses ratio as well as her submission count, nevertheless, the Unity athlete managed to take 5th place on this list which is a very strong result, given how many tough matches she had as far as 3 weight classes above her natural weight.

Super-heavyweight Yara Soares, on the other hand, suffered an injury early in the year and was forced to miss much of jiu-jitsu’s tournaments on her way to recovery, nevertheless, she left her mark with a placement in the ranks. 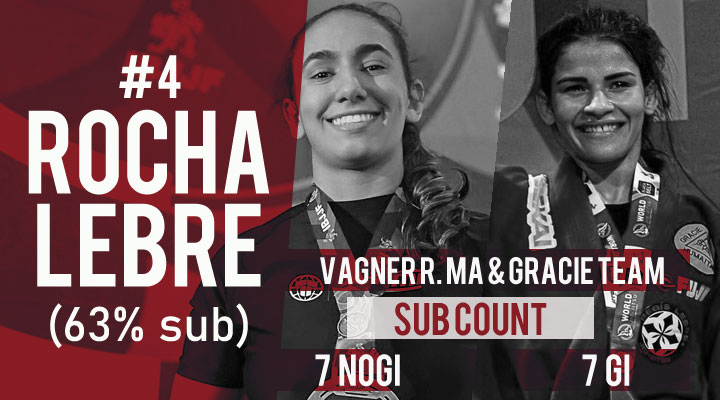 Two young black belts with a ton of potential already making themselves heard in the main division of the sport, each in a different ruleset. Lebre more focussed on the gi and Rocha following no-gi.

This is also the first time we have a father and a daughter on these rankings, namely Jasmine Rocha and Vagner Rocha. A family that is quickly launching a dynasty of grappling prowess. 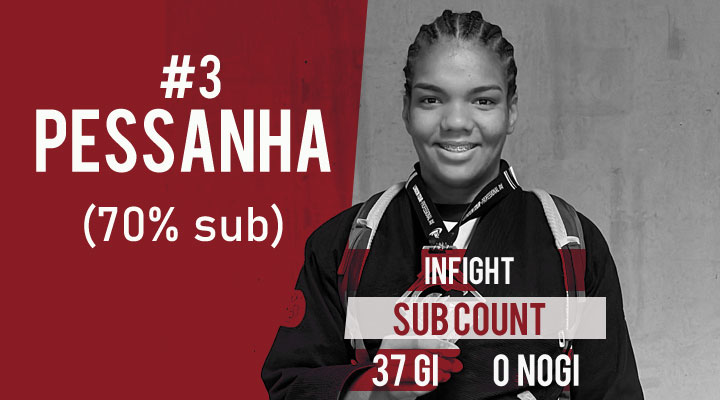 Ahead of the game ever since she joined the black belt division, Pessanha is now 100+ matches into her career, having amassed solely 6 losses. None of which came from more than a 2-point deficit. She is incredibly versatile, submitting from her back, passing stance, or from the back control and she is as efficient as she is deadly.

More recently Pessanha has received fierce competition from brown belt Giovanna Jara on the AJP circuit. When Yara Soares and Nathiely de Jesus return from their layoff, expect the female super-heavyweight division to become a lot more competitive than it has been over the past 2 years, and with it, more challenging experiences for Gabrieli, who mostly cruised through 2022. 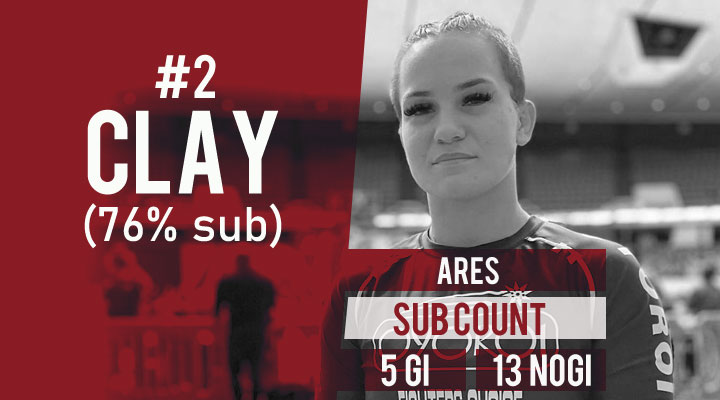 The queen of the straight ankle lock, Elisabeth Clay was one of the most fun grapplers to watch in 2022. Always entertaining and hunting for the submission, Clay did her best work from the guard, a facet of her game that is still her forte. Nevertheless, by the end of the year, particularly at the No-Gi Worlds, we were able to see more of Elisabeth’s top game, where she showed that, despite being already at the very top of female jiu-jitsu, she is not resting on her laurels and has added new tools to her portfolio With this attitude and the support of a strong team like Ares, the sky is the limit for the 2022 double gold World No-Gi medalist. 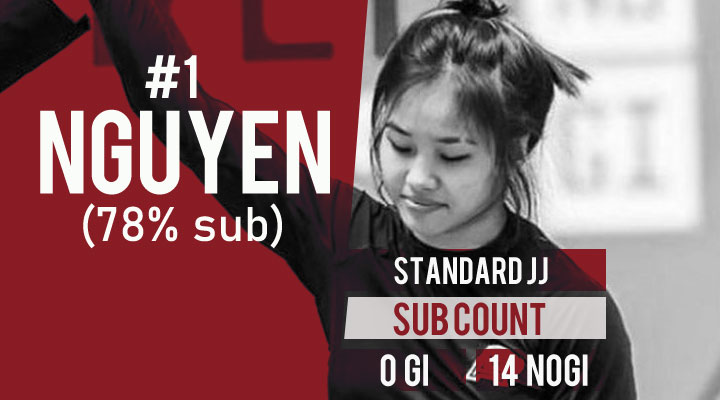 After a bumpy start to her black belt career, with Covid restrictions and a few unexpected losses on her resume, Nguyen bounced back with a tremendous 2022 filled with wins at the professional level, including back-to-back Midwest Finishers titles, as well as IBJJF Pan No-Gi and a World No-Gi gold medals while beating big names like Jessica Crane, Andressa Morais, Trinity Pun, and Thamires Aquino. A very special year for Standard Jiu-Jitsu’s rising star.