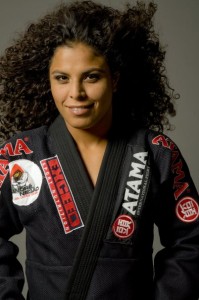 Very few people in the grappling world are not familiar with the name: Hannette Staack. Hannette is one of the most decorated Brazilian Jiu Jitsu competitors on the planet and a true legend of the sport, having conquered 8 Mundials and 3 ADCC gold medals; she is also one of the founding members of the Brazil 021 team, a young group teaming with talent. On a cold December day, Hannette Staack took some time off her busy schedule to answer a few questions for BJJ Heroes, the interview now follows.

Hannette Staack: “I believed in my dream and was not discouraged in front of adversity”

You have been a constant presence at all the top level competitions for a number of years now, how have you managed to be at the top of the Jiu Jitsu ladder for such a long time?

Through a lot of work and dedication, this is my only formula for success. Due to my work load at the academy I can’t compete as much as I would like to, but because of that, every tournament I enter I really commit in doing my best. For that reason, when I have a competition coming up, I reduce my coaching schedule and focus more on my own training, but I never stop teaching BJJ, at least once a day I am on the mats coaching. I believe that coaching helps me refine my Jiu Jitsu. When I add all these things up, usually the result is a good day at the competition.

What is a normal day in Hannette’s life? I mean, from what I’ve heard you are a house wife, mother, coach and fighter! How do you manage to reconcile all this?

Opa! Not a mother yet, but soon… Always running, and always working, be it at the academy coaching, at home taking care of my family’s diet, at the office managing our company and dealing with bureaucracy in the United States and Brazil. At the end of the day the only time I have left is to eat and rest. I always try to have, at the very least, one training session per day on tight days and twice when I have the time and working on my strength and conditioning every day, except Sundays which is my day off, we need at least one day off per week; otherwise the machine stops working. Sometimes it is hard to manage everything, but if I organize it well it works, the main thing is to make it a habit so you get used to it and it all becomes a lot easier.

Your team, Brazil 021, gives a lot of emphasis on building character as much as building good fighters, which leads me to the next question. In the 1980’s and 1990’s Jiu Jitsu had the reputation of being a sport for the playboy or the street fighters, do you still see that stigma associated with the sport or do you see improvement in the social aspect of Jiu Jitsu?

I know for a fact that it has improved a lot, but there is still prejudice. The professionalization of the sport has contributed greatly to this improvement, nowadays you have to be federated to be part of a tournament, or even to be respected as part of Brazilian Jiu Jitsu.

Brazil 021 are lauching a Pro-Bono project at the slums of Borel (Morro do Borel) in Rio de Janeiro. How are the preparations, how did the idea come up and why the Borel?

The idea to start at the Borel was due to the sheer numbers of students we have at our academy from this and other nearby communities. These guys are the true pioneers of Jiu Jitsu in Borel. If we are going there we owe it to them. We are wrapping up the necessary procedures to complete this project, but we already have people and companies that have invested in this by giving us mats. In the near future we will have more help providing kimonos and paying for tournament subscriptions.

In the history of Jiu Jitsu, many important athletes have come from the slums, (Terere, Finfou, Marlon Sandro, Sergio Moraes etc, etc). How beneficial for the sport are these incursions and what are the main benefits the underprivileged can reap from Jiu Jitsu?

I believe that the biggest prodigies in the sport have come from the impoverished communities. I am an example of that, when I started BJJ I did not have means to pay the monthly fee. My coach sponsored my training and in exchange I dedicated all my time and effort to practice, today I reap the benefits of this opportunity that was given to me 14 years ago. I am thankful every day for having had the opportunity to learn Jiu Jitsu and through it having become the person I am today. The difference between myself and many other people that were given the same opportunity (even here in my academy) is that I followed through, I believed in my dream and was not discouraged in front of adversity, but I have seen many that were handed the same opportunities that I had yet stayed behind because they did not have the same determination. Our biggest objective with this project is that people value their opportunities and that we can lead by example.

Going back to your career as a fighter, until when do you plan on keep competing?

If I could I would never stop (laughs)… But the truth is, we need to know the right time to stop and give rest to our bodies. After all these years competing in all different weight categories and against so many different people, the time comes to put your body at ease. I hope I can be like Helio Gracie and get to 90 years of age still training. Competition demands a lot from your body, when you are young you don’t feel it that much, the recovery is faster and so is the metabolism, but time is unforgiving and it gets to us all. If you don’t stop at the right time, your body will stop for you. I believe I will stick around for a couple more years and after that I will pass my knowledge to my son or daughter, if they want to learn, of course!

After such an amazing career with so many battles, in your opinion, who were your 3 toughest opponents?

I think my toughest oponent is myself, because if my head is not 100% the internal battle is more tiring then the actual fight, but if I need to name 3 they would be:

1- Andreza Pinho (Manaus) fought her in the open weight division of the Brazilian Nationals in 2003.
2- Luanna Alzuguir;
3- Ana Laura Cordeiro.

How do you see this new generation of fighters in the female division?

I am kind of biased to talk about female fighters, but I love to watch women fight. I think there’s a lot more action, technique and agility in most cases… I think the level is beautiful, getting more professional as well. I just think that for the future the sport needs to evolve more and we need to start checking for doping, as this is what weakens the sport.

As you said, Jiu Jitsu has grown a lot in these last few years, who do you like to see the most in BJJ today?

In the men’s divisions I would say for sure Roger Gracie and Marcelo Garcia, in the female I really like Michelle Nicolini’s style, she is always going forward, always attacking. Her footlocks are very dangerous, I really identify myself with her in that sense.

Going back to Brazil 021, you guys have started doing BJJ Camps, bringing a lot of foreign athletes to these events in Brazil. When are these taking place and where can the people who are interested subscribe?

This year we will have our second Jiu Jitsu camp which will take place around the same time as the Rio Open and the Internacional de Master e seniors. People who are interested can send us an email requesting more information ([email protected]). The main purpose of the camp is the exchange of ideas and experiences, so that people can have a chance to train in Brazil, understand a little more about our culture and access different people with different ideas about Jiu Jitsu.

Brazil 021 has schools in the United States, a country that has invested alot in Jiu Jitsu. Do you think the USA will one day stand toe to toe against Brazil at an international stage?

Most definitely, the results of this work are already bearing fruits with medallists at international competitions. BJJ in the US arrived later but I see the credit that is given to the coaches, that is why more famous instructors with lots of experience are coming here always bringing the standard higher and higher. This is great for us, the level of the athletes is always improving and the investments being made are also growing.