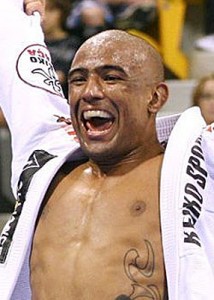 For those of you that might have not paid attention to the BJJ calender, the last stage of the “Brasileiro” – Brazilian National Jiu Jitsu Championship was this weekend. One of CBJJ’s most prestigious tournaments and a chance for those that cannot travel to the United States to display their prowess. One of the greatest surprises of the tournament, however, did not come from the South American country; it came from half way across the world as Aussie competitor Michael Wilson (Gracie Barra Australia) took gold in the “Pesadissimo”. Wilson didn’t need to fight the final as the two semi-finalists on the other side of the bracket (“Big Mac” and Bruno Mathias) both got DQ’ed and could not proceed in the tournament.

Complete domination by Malfacine who took gold with a solid 23 to 0!

Aryzinho had another very good tournament, solidifying himself even further as one of the top fighters of the division, he defeated Gabriel by one sweep (2-0), he had won a tough match in the semi finals against “Terere’s” cousin Leandro Martins.

A tough match for Frazatto who took the gold by making use of his dangerous guard game.

Bad year for (the until a few months ago undefeated in the black belt division) Michael Langhi as he suffered his second defeat of the year and again by the Sao Paulo native Leandro Pereira, who is slowly becoming Langhi’s nemesis in the lightweight division.

One of the most exciting matches of the afternoon, Garcia makes good use of his guard to win the match by points 4×2

Sergio continues in good form through 2011 with another win, this time over Nivaldo by 2×0

Evangelista took the win after a referee’s decision.

Awkward moment in the Brasileiro as Wilson was left with no one to fight in the final since both semi-finalists from the other side of the brackets were disqualified for stalling.

The always exciting Michelle Nicoline submitted the Cristiano Marcelo black belt within 1 minute in the only black belt final that ended in submission.