As some might know, jiu jitsu and surfing have walked hand in hand for some time with many jiu jitsu fighters being avid surfers and big name surfers such as Joel Tudor, Frederick Patacchia (Freddy P.) and Kelly Slater training BJJ. This tight bond goes as far as fashion, with major surfing brands having supported jiu jitsu since the 1980’s (the famous Lightning Bolt BJJ tournament in the 1980’s comes to mind) and more recently the powerful RVCA sponsoring fighters such as the Mendes brothers, Rickson Gracie, Lucas Leite, BJ Penn and a few other grapplers.

The Pioneers in Jiu Jitsu and Surf

The first Gracie family member to pick up a surfing board was Rolls Gracie. Rolls was the most iconic Gracie of the 1970’s, a champion on the mats and a leader out of the mats, he was involved in the development of the sport by adding cross training in other martial arts to further develop his jiu jitsu potential. As Rolls had a few students who surfed at the Arpoador, (a famous surfing beach near Copacabana where his academy was allocated) he started surfing there as well as a hobby. Rolls’ responsibilities did not allow him to surf regularly, so his cousin Relson started making more use of Rolls’ surfing board starting his surfing in 1972. Relson Gracie was more of an instigator for surfing in the Gracie family hold. Relson adopted the surfing lifestyle much to his father’s dismay, choosing to move to Hawaii in 1988 to teach jiu jitsu and to be closer to the best waves in the world. Following their older brother’s footsteps, Rickson and Royler also became surfing fans and from their generation onwards, surfing and jiu jitsu carried on this close relationship.

The fact that we see so many jiu jitsu’s “hotspots” close to good surfing areas is obviously not coincidence but a result of this tight bond. When the Brazilians migrated to the United States to spread jiu jitsu, their main destinations were surfing spots, this being most likely reason why BJJ grew faster in the West Coast (California) then the East Coast.

But this relationship between jiu jitsu and surfing wasn’t always a peaceful one, and both sports locked horns on several occasions. The first recorded confrontation happened in the mid 1970’s at the famous Praia do Diabo (Devil’s beach) in Rio de Janeiro. The brawl occurred between Rolls Gracie and his students against a surfing crew led by the famous Daniel “Sabbá”, a professional surfer from the area. The story goes that Rolls Gracie was riding a wave and happened to cut off surfer Daniel Friedman, who called Rolls out on his poor surfing etiquette. As Friedman was with his gang, Rolls did not feel it was wise to confront him there and then. Instead he returned to his gym, a few blocks away, and came back to the beach with a few of his students; including a 14 year old Rickson Gracie who came to watch (his older cousin told him he was too young to fight at the time). When Rolls arrived with his 15 troops at the beach, Daniel “Sabbá” (Friedman’s best friend) had managed to gather 30 surfers, including the legendary Pepê (Pedro Paulo Carneiro) a surfing legend of the 70’s. On Rolls’ side, there was also a celebrity, the actor Mario Gomes who later became a very big soap opera star in Brazil. The generalized brawl lasted for only a moment, as all the surfers were either put to sleep, or ran out, this much was told by “Sabbá” himself to the Brazilian TV show, Canal Combate a few years ago.

By fate, on the following day after this brawl, Daniel “Sabbá” went to do his usual 5am surfing routine at the Ipanema Pier. He was the only person surfing until minutes after he entered the water, another surfer showed up to keep him company, that man was Rolls Gracie. This random meeting turned both men into friends, as they made peace with one another in the water and Rolls invited Daniel to come and train at his academy.

This altercation between the two sports, strangely as it may seem, was a major instigator in the cross over between surfers and grapplers who started cross training in both sports more and more after this event. Sabbá trained with Rolls for a long time, and later at Gracie Barra with Carlinhos Gracie, reaching the degree of purple belt. 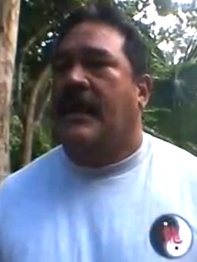 Another famous confrontation between a famous surfer and a jiu jitsu practitioner happened in 1977. The two involved in the altercation were none other then an 18 year old Rickson Gracie and Byron Amona (today called Brian Amona) who belonged to the famous Hawaiian surfing gang, “Da Hui”. Byron Amona came to Rio de Janeiro to compete at the Pro Surf Tour, bringing great attention to himself and fellow surfing stars Michael Ho and Mike Purpus who were curious to see these men who they only had seen in the magazines. Cherishing the opportunity to surf alongside these stars, a local Arpoador beach surfer nicknamed “Foca” (Seal) borrowed his friend Sérgio “Malibu’s” surfing board. While surfing, as he fell from his board (which he was riding without the use of the leash), the board hit Byron’s forehead. The Hawaiian surfer was furious and broke the board’s fins. When “Malibu” heard what Byron had done, and persuaded by his own friends, he felt he needed to challenge the giant American, but failed to do so fearing his size.

The following day, Rickson and Relson Gracie were at the beach surfing. They heard what had happened and didn’t agree with a foreigner coming to their beach causing havoc and leaving unharmed. They demanded that Sergio “Malibu” challenged Byron and told their friend they would stick up for him if he did. “Malibu” agreed to go to where the Americans were to challenge Amona, 5 cars with 17 Brazilian surfers (including Relson and Rickson) drove down to a surf shop, where they were. As soon as they arrived, “Malibu” broke Byron Amona’s brand new surf board which was lying on the outside of the shop. Amona came out fuming and demanded to fight the man who had broken his board, so Rickson jumped in, a circle was made around the two men and Rickson choked the surfing legend out of consciousness with a “mata leão” reviving him with punches, only to choke him out again.

This wasn’t the only encounter between a “Da Hui” and a jiu jitsu practitioner, the alleged “Black Shorts” front man, “Fast Eddie” Rothman and his son, professional surfer, Makuka Rothman are jiu jitsu enthusiasts who have trained with “Kid Peligro” in Hawaii. BJJ black belt “Kid Peligro” on the other hand, is a massive surfing enthusiast who started coming to the North Shore in Hawaii to surf back in 1975, there meeting the Rothman family. 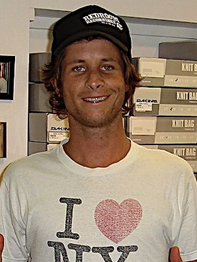 Surfing and jiu jitsu seem to have developed a harmonious relationship since this tumultuous start, and today a mirage of fighters cross train in this amazing sport. In the 1980’s this bond started picking up and more big names became avid surfers, names such as Marcelo Behring who was very well known amongst surfers and a common face in renowned surfing magazines.

In fact, some academies have benefited from being in good surfing locations, which brought to these gyms athletic and avid young surfers which the respective coaches have shaped into formidable jiu jitsu athletes. That was the case of the Carlson Gracie academy developing a former wannabe professional surfer, Murilo Bustamante, in one of the greatest grapplers of all time. Also the Gracie Barra team, when it opened in the Barra da Tijuca surfing burg which turned many of those youngsters into grapplers, including Ricardo “Cachorrão”, Alexandre “Soca” or Mauricio “Tinguinha”, three legends of the sport; more recently the same happed with the Checkmat headquarters in Santos, Sao Paulo, that turned a young surfing teenager into the best jiu jitsu fighter of 2012, Marcus “Buchecha”.

Some combined efforts have been made to join jiu jitsu and surfing in the same spot. An interesting event occurred in 2011 when the famous BJJ and MMA fighter Gunnar Nelson, accompanied by one of his mentors, John Kavanagh, made a Surf & Jiu Jitsu workshop. This event took place in a beach in the Portuguese region of Algarve (Lagos). Gracie Barra has also pushed for this sort of workshop, namely through their academy in San Clemente.

On the surfing side of grappling, the most accomplished high level surfer to make it also in jiu jitsu’s competition world is Joel Tudor, a former world surfing champion who has conquered several important medals in tournaments such as the US Nationals and the Pan American Championships. Tudor is also a black belt under Rodrigo Medeiros and an ADCC veteran. The famous “Zé Radiola” (Braulio & Victor Estima’s coach) was also a professional surfer before he converted to jiu jitsu.