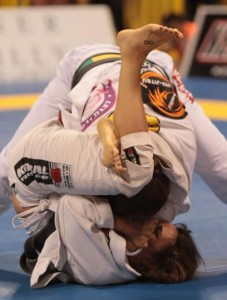 2011, another year, another great start to Brazilian Jiu Jitsu’s competitive season. This year again, many new faces coming out of Europe’s prime tournament with hot prospects for the forthcoming years in the lower belt divisions and many fresh new candidates in the black belt divisions (special lookout for newcomers Ary farias and Gabriel Goulart two names to keep an eye out in the near future that made alot of buzz in the lower belts).

From the brown belt divisions this year, a name shinned higher then all others, and a future star might be in the making in Danish power house, Alenxander Trans from Checkmat. The Dane submitted everyone of his opponents, including last year’s “Meio Pesado” winner Yuri Simões in the final of the absolute.

The black belts battled for the absolute division on Saturday (29th of January 2011) with Sergio Moraes and Claudio Calasans reaching the final. Moraes beat Rodrigo Cavaca (with a toe hold) after another match plagued with the 50-50 guard, while Calasans showed again his tenacity to get through the world champion Bernardo Faria (more regarding the final bellow this section).

The ladies absolute division was another display of the Alliance show, as the usual suspects Gabi Garcia and Luana Alzuguir closed the final yet again.

On Sunday, most the black belt roster for 2011 was out on display in all weight classes for the first time this year. A few important people absent due to other arrangements, fighters like “Demente”, “Buchecha”, Pablo Silva, Antonio Peinado and many others, but it was worth seeing the legendary Braulio Estima back on the mats wearing a kimono. The fighter has adopted Birmingham – England as his home over the last few years, and decided to come back to competition to honour one of his students who passed away recently. He made his friend proud, reaching the final of the Meio Pesado category against Sergio Moraes and winning the tournament for the third time in his career.

Pluma: Ary Farias (Atos) vs Bruno Malfacine (Alliance) – Winner Farias
From prospect to certainty, Aryzinho has proven he is worthy of being on the mats with the best in the world, winning against the best of the Plumas in recent history. The fight had alot of movement and back and forth action. In the end Ary Farias achieved his first big win as a black belt by points (6-4)

Leve: Michael Langhi e Lucas Lepri (both Alliance)
Another excelent display from the Alliance wizards, reaching another important final of a major event.

Médio: Bruno Alves (Gracie Barra) x Cláudio Calasans (Atos JJ) – Winner Calasans
The English based Gracie Barra black belt (former European World Champion) faced one of the most dangerous fighters in his division, and succumbed to the Atos standout. Calasans choked Alves in the only submission of the black belt finals.

Meio Pesado: Sérgio Moraes (Alliance) x Bráulio Estima (Gracie Barra) – Winner Estima
Another classic match between Alliance and Barra Gracie, Estima managed to pull through with a win by advantages and dedicate the win to his student (recently deceased)

Absolute: Cláudio Calasans (Atos) x Sérgio Moraes (Alliance) – Winner Moraes
Sergio Moraes pulled the win by an advantage after a tie in the scoreboard at 4-4.